Score as many points as possible.

Players score points by giving CORRECT answers to the ques- tions. Players lose points when they give INCORRECT answers. Of course, what is considered CORRECT or INCORRECT depends on the situation, as you shall see...

Choose a first reader. Turn order doesn't matter; each player will be the reader once.

The reader must face all the other players, so everyone can see him well.

He takes the deck of question cards in his left hand. He places the cards face-down, so the questions are not visible.

He takes the first card of the pile in his right hand, hiding the back from the other players, and reads aloud a question of his choice from the card.

All the players can now answer the question aloud.

Only the first answer to be heard will be taken into account. Note: If an answer is multiple words (for example, "Green is made with which two colors?"), the first player to talk is considered to be the first to answer. If many players answer at the same time, the reader decides who spoke first.

We then verify whether the player has given a CORRECT answer:


Therefore, for the same question (from one game to another), players must sometimes give a right answer and sometimes a wrong one.

If the player who answered first gave a CORRECT answer (wrong or right, depending on the back of the top card of the deck), he earns 1 point.

To keep track of the score, use paper or give the question card to the player. He can place the card face-up for a positive point and face-down for a negative point.

Examples of CORRECT answers when we must be WRONG.

In its format, each question already indicates what type of answer is expected: a color, a country, a singer, a value, etc. We wrote the type of answer expected in bold. The reader decides whether a contestable answer is part of the requested category. The right answers are written in green after the question.

Some questions, called "absurd questions", don't have logical answers. For example: "What color are the letters of the alpha- bet?" Absurd questions are written in blue.

When the reader reads an absurd question, the only CORRECT answer is: Think again!

Any other answer is considered INCORRECT, and will cause the first player who answered to lose a point.

You can of course decide to agree on another answer to absurd questions, such as "I don't think so" or "Really?".

Note: As always, the reader shows the back of the next card when he reads an absurd question.

Each reader reads 5 questions consecutively on 5 different cards. He then passes the deck to the next player, who will be the new reader.

If there are just a few people playing, don't hesitate to have each reader read more questions.

The game is played in three rounds. Form teams of two players. If there is an odd number of players, one team will have 3 players.

In turns, each player has a limited time of 30 seconds to answer as many questions as he can, asked by one of his teammates. Every correct answer is worth 1 point to the team. Teams don't lose points for incorrect answers. Opposing teams check the answers.

The rules are the same as in the first round, but each correct answer worth 2 points to the team. The tension is high! In addition, for this round, the first incorrect answer ends the player's turn, even if he still has time. Read this rule again, you might forget it! 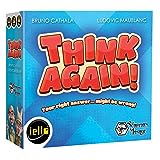