The true object of the game is laughter, but if you're concerned about winning... here's how you play: in each round players write a response to a topic. Your response can be as outrageous or as straight-forward as you'd like.

Then take turns trying to eliminate each other by guessing which player wrote which response.

Someone keeps score. This player takes the score pad. Every player gets a pencil and one sheet from the response pad.

Place the cards face down within reach of all the players.

Pick a player to be the Reader for the first round. 1 This player picks a card and reads it aloud.

What The Reader Does

Everyone (including the Reader) writes a response on one strip of paper from their response sheet. Fold it twice and give it to the Reader.

Important: There are no correct answers! These are topics not questions. So write whatever you want: straightforward things..., funny things..., outrageous things..., or write something that another player might write just to confuse things...

The Reader reads ALL the responses aloud a couple of times.

The player to the left of the Reader guesses first. Choose any response and try to match it to the player who wrote it. If you're right, the Reader gives the response sheet back to its writer and that player is out of the round. Now you guess again.

If you're wrong, you're still in the round but the chance to guess passes to the player on your left. You remain in the round until someone matches you up with your response.

When only one player has not been matched to his/ her response. The person to the left of the last Reader now becomes the new Reader. The game ends when

When reading responses, the Reader should always only read them aloud. Studying the responses quietly while other players are guessing should be avoided out of fairness.

Also, some players have brought it to our attention that with smaller groups the Reader may recognize handwriting and therefore be able to easily match players to their response.

We originally dealt with this by asking players with distinctive handwriting to print in block letters.

We like to keep the Reader in play but if it's noticeably affecting your game play then simply have the Reader write a response but not participate in the guessing portion of the game.

If you can read and write, you can play The Game of THINGS... but parents can take a look through the cards and remove any topics they think the kids might not understand. They are still going to make you laugh.

The Game of Things... New Edition 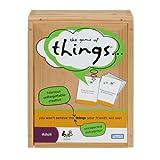 The Game of Things

The Game of Things... Expansion/Travel Pack