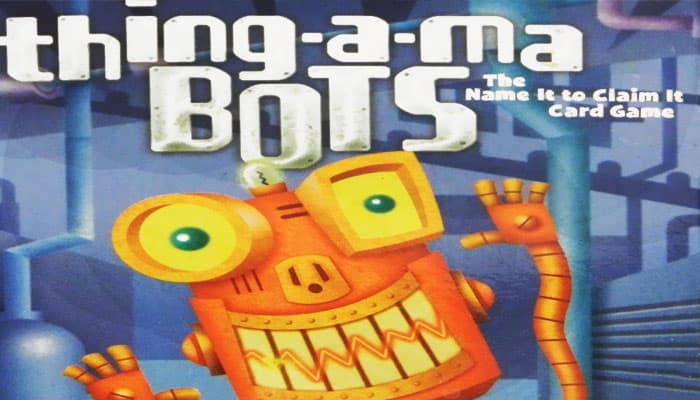 Name robot characters and remember their names to collect cards. Gather the most robots to win the game.

Shuffle the deck and deal face-down cards evenly to all players. Place any extra cards out of play. Stack your cards in a face-down "Play" pile in front of you. (No peeking!)

Thing-a-ma-Bots is played in rounds. The person whose first name is closest to "A" starts and play continues to the left.

On your turn, flip over the top card from your Play pile and place it face up in a center pile. (Don't look at your card as you flip it over - It's only fair if everyone sees the card at the same time).

Depending on the card, take one of the following actions:

If your card is a new robot, give it a name. The name can be anything that comes to mind, from regular names ("Jane", "Billy", "Aunt Sheila" ..). to names that remind you of the picture ("Freaky Fido", "Steam Machine", "Spaghetti Head"). to nonsense names ("Siskamella", "Bachinga", "Wartabulous"..)..

No matter what you call it, be sure to say the name out loud so that all players can hear and remember it. The round continues with players taking turns, naming new robots as they come up.

If your card matches a robot that is already in the center pile, the first player to remember and correctly call out its name wins the pile. Take all of the cards and place them next to your Play pile, forming a face up "Wins" pile.

Once you have a Wins pile, add cards to the top. The player to the left of the person who last played a face up card starts a new round.

Robot names do not carry over from round to round. The same robot can have a different name in each round. (See Variations for a different way to play).

Once a robot is on top of a player's Wins pile, it loses its name and becomes a "Thing-a-ma-Bot".

Any time the top center pile card matches the top card of any player's Wins pile, the first player to notice and shout, "Thing-a-ma-Bot!" steals that player's entire Wins pile. (Add cards to the bottom of any existing Wins pile).

If more than one player says either the correct robot name or "Thing-a-ma- Bot!" at the same time, the cards are divided equally among the winning players. (Place any extra cards out of play).

If you shout out the wrong name or call out at the wrong time, you must forfeit one card from the bottom of your Wins pile. Place the card out of play.

If no player can remember the name of a robot but all agree it has come up before in the round, place the center pile off to the side within view of all players and start a new round.

The top card becomes a Thing-a-ma-Bot and the first person to shout "Thing-a-ma-Bot!" at the next match wins that pile.

The game ends as soon as one player is out of Play pile cards. Leaving any leftover cards from other Play piles out of play, count the number of cards in your Wins pile.

The player with the most cards wins the game.

Decide before you begin the game if you will be playing with either of these versions:

Same Name Game: Once named, the names of the robots stay the same throughout the entire game.

Thing-a-ma-Body: Instead of making up names to go with the robots, invent body gestures and/or sounds (clap hands, pat your head, stick out your tongue).

For younger players (3 or more): If the card is a "Same-Bot" or a "Thing-a-ma- Bot", the player who played the card does not shout but instead judges who