Pop one complete and identical set of objects into each sock.

Spin the arrow to select an object. Call the object.... "Ready. steady. go*.

The first player to find and remove the object wins a point. If you pull the wrong object. put it back in and keep searching.

After each round put the objects back into your socks.

The first team to score 11 points wins. (if 2 players, first to 5). Just like ping pong. you need to win by two clear points.


The Three No's of Sock Game

Only one hand is allowed into the sock. you can use the other to feel for the objects from outside.

Stay in your blocks. wait for the call. false starts are strictly forbidden. never have your hand in the sock before an object has been called.

No rolling the sock down and taking a sneaky look inside. Any breach of the three no's is an instant point to the other team.

The joker (if spin selected) brings into play the winner takes all round. Spin the arrow again to select an object. Play the round as normal.

The first player to find and remove the object wins the game outright. Boom.

Count how many players on each team and spin the arrow the same number of times to select the objects - this creates your sock race list.

e.g. If there are 6 players on each team. spin the arrow 5 times and write down the 5 objects.

Note: The joker is not in play for this game variation, so if the spinner lands on this then just spin again.


It's time to go racing

The first player on each team takes the sock and hunts for the first object.

When the first player finos and removes the object, they keep hold of it and pass the sock onto the next player in the team.

The second player now hunts for the second object and so on until all the objects have been found.

The first team to find all the objects in the correct order wins.

Each object must be found in the correct order on the sock race list.

Only pass the sock when you have found the correct object (even if the other team has already found the object and passed their sock on). There is no going back 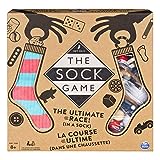