This collaborative game simulates a trip over The Oregon Trail in 1847. You are all now part of a wagon party that is attempting to make the treacherous 2,040 mile journey From Independence, Missouri to Willamette Valley, Oregon - iF you can make it alive.

To have at least one member of the wagon party survive the rigors of The Oregon Trail and reach Willamette Valley, Oregon alive. Good luck-it's rough out there on the Trail.

Everyone playing the game is working together to get from here ...

... without everyone in the group dying a gruesome 19th century death First


If at least one member of your party makes it to Oregon, everyone wins. It's harder than it sounds.

These cards represent the beginning and end of the Trail. Place the Start Card on the table, and place the Finish Card approximately 3 feet away as the endpoint.

Supply Cards are used to remedy specific Calamity Cards. Supply Cards can be played on a turn instead of a Trail Card. On his/her turn, any player may remedy a calamity by playing a Supply Card (not just the player who suffered the calamity).

Trail Cards are laid down on the table in sets of 5 as the party makes its way to Oregon. In addition to Trail Cards with no markings, there are a few other types of Trail Cards

A player playing one of these cards immediately draws a Calamity Card and follows its instructions.

Crossing a river is treacherous. Follow the instructions on the card to try to ford a river.

One player must successfully ford the river before any more Trail Cards can be played, so if a player dies, loses a Supply Card, or if nothing happens ( by rolling a 3 or a 5 on the "Lose a Supply Card" River Card), play passes to the left.

The next player does not play a new Trail Card; s/he rolls and follows the instructions on the most recent Trail Card played. This continues until one player fords the river. Play then continues to the left of the player who forded the river.

Towns and Forts can be played off of any Trail Card, and they allow the person who played it to draw extra Supply Cards or remove a Calamity Card from play.

Calamity Cards represent the hazards of the Trail. You may be bitten by a rattlesnake or overcome by disease . If you draw a Calamity Card , just follow the instructions printed on it.

The person who draws a Calamity Card is the one who follows its instructions.

The Trail is constructed of sets of five cards. When the fifth Trail Card is connected, the cards must be stacked.

Pick up the first Trail Card played in that set of five and pace the other cards underneath it.

Exception: For the first set of five cards only, the player who played the fifth card can choose that card or the first card played to go on top of the stack.

No Trail Card or Supply Card you can play? Then you have to DRAW, Pardner.

At any time, players may trade in two Supply Cards in exchange for one Supply Card of their choice from the Supply Shop.

One player may trade in two cards, or two players may each contribute one card. If two players contribute, they must then agree on who gets to keep the Supply Card they receive.


Dying on the Trail

Some Calamity Cards don't have to be remedied right away , but players won't have the opportunity to remedy them when the second card of the same type is drawn.

Tatiana was born in Cheyenne, Wyoming, so she goes first. She connects a Trail Card to the Start Card. Tatiana's Trail Card says "Press Spacebar To Continue. Draw A Calamity Card Now".

Tatiana draws a Calamity Card, places it face up on the table, and reads it aloud. For this example, Tatiana drew an Extreme Cold Calamity Card.

"Extreme Cold. The temperature is below freezing. Bundle up and beat the cold with 1 Clothing Card. One round of play without a Clothing Card and you have DIED of extreme cold".

Play passes to Greg, who is sitting to Tatiana's left. Greg says, "I have a Clothes Card I can spare for you". He hands his Clothes Card to the Shopkeeper, who places it on top of the other Clothes Cards in the Supply Shop. Tatiana removes the Extreme Cold Card and discards it. Greg's turn is over, and play passes to the left.

If Greg did not have a Clothes Card (or if he had one and chose not to play it-sorry, Tatiana!), then he either plays a Trail Card or draws a new Trail Card (if he doesn't have a Trail Card he can play). Play passes to the left.

On Tatiana's next turn, if the Extreme Cold Card has not been remedied she can play a Clothes Card to save herself. If she doesn't have a Clothes Card, she can trade for one from the Shop (see, Trading Supply Cards, to the left).

If she still doesn't have a Clothes Card, she freezes to death. Either way, this ends the round. Play passes to the left. 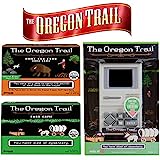 The Oregon Trail - The hunt for Food