Give each player a pencil and a few of the Write-in Papers.

Place the easel and the stack of Cartoon Cards in the center of the table.

The oldest player will be the first judge. The judge draws the top 3 Cartoon Cards and chooses their favorite. He or she places that one on the easel so that the caption on the bottom is covered. (See image).

The judge discards the other 2 Cartoon Cards by placing them at the bottom of the card deck. Now you're ready to play!

All players except the judge look at the Cartoon Card on the easel and write a funny caption that will impress the judge. Players then pass their submissions into the judge.

The judge then reads all the written captions out loud and chooses their favorite.

To close out the round, the judge then reads the original caption on the cartoon, and players discuss whose caption is better: the winner of the round, or the original! 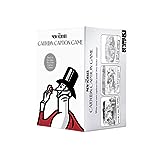 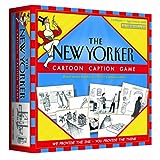