The fairies need your help. Mr. Winter is trying to freeze the garden.

Collect all four colored jewels and place them on the wand before Mr. Winter has placed four Snowflake tokens on one flower. If you can do this, you all win together.

Set out the game board. Place each jewel in the center of its matching flower. Place the Snowflake tokens in a pile near the board.

Shuffle the Fairy Garden cards and place them face down in a pile near the board.

Shuffle the Snowstorm cards and place them face down in a pile near the board. The youngest player goes first and play continues clockwise.

On the first turn, each player will draw one card and place it face up, next to the board. This is the start of your hand. If a player draws a Mr. Winter card on the first turn, follow the rules for that card.

Cards are played face up in front of you. If you draw a Fairy, Wand, or Golden Unicorn card, you may be able to perform one Special Action.

You can also choose not to perform an action on your turn. Discard one or more cards if you have more than five cards in your hand. It's now the next player's turn.

You can use a Rainbow Fairy card like a wild card to take the place of a fairy of any color.

Place all four jewels on the wand before Mr. Winter freezes any ONE flower completely with four Snowflake tokens and you all win!

The fairy garden is saved! If four Snowflake tokens are on any one flower before all four jewels are on the wand, Mr. Winter has won and the garden is frozen! 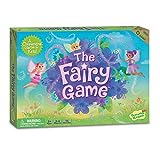