As everybody knows, dwarves have beards and their king has the longest! So the King of Dwarves is a bearded guy who is even more bearded than the others ...

The player with the highest total score after seven hands wins the game.

A different scoring rule is chosen for each hand. The quest determines how many points are scored during the present hand.

Note: a trick designates the cards that have been played during a turn and that have been collected (taken) by the player that played the highest card.

A hand designates both the cards in a players hand and the succession of tricks played with the players' hands.

Shuffle the tiles, the 39 basic cards and the 14 special cards separately. A game of King of Dwarves is played in seven hands.

The first dealer is the owner of the game. Afterwards, the dealer is always the player who took the 5 of Dwarves in the previous hand.

The dealer draws the first of the special cards, reveals it and explains its effect to all the other players.

The player who has the 5 of Knights must show it. He draws the top Quest tile from the pile, reads the two scoring rules written on it, and chooses one, explaining it to the other players.

The text of the scoring rules always refer to the cards or tricks taken by the players, not to the cards they have in hand at the start of the hand. Playing a hand

Summary of the Three 5s

Note: to lead is to play the first card in a trick.

At the start of a hand, the player who has the 5 of Goblins must show it. He has to lead the first trick by playing the card of his/her choice (not necessarily the 5 of Goblins).

Example of the beginning of a hand with 3 players:

Peter took the 5 of Dwarves in the previous hand. He becomes the dealer for this hand.

He draws a special card (the Dragon), shuffles it in with the rest of the cards and deals 13 cards to each player (remember, this is a 3-player game).

Bruno gets the 5 of Knights. So he draws the top Quest tile and the scoring rule he chooses for this hand is: "Knights victory over Dwarves: +1 Point per Knight, -1 point per Dwarf". It means that each Knight card taken will earn 1 Point whereas each Dwarf card taken will make players lose 1 Point.

Catie has the 5 of Goblins so she plays first.

She plays a 3 of Dwarves. All the players must play Dwarf if they have some. Peter plays a 4 of Dwarves. As Bruno has no Dwarf in hand, he can play whatever he wants instead and chooses to get rid of the King of Goblins.

Peter takes the trick (he had to play Dwarf and his 4 of Dwarves beats Catie's 3 of Dwarves ; Bruno's card, the King of Goblins, could not take the trick, since it was not of the called suit) and so leads the next trick.

Points are scored and added up after each hand.

Once the last trick is played (the players have no more cards in hand), they count how many points they scored during the hand.

Depending on the scoring rule that was chosen, cards taken in the tricks will make them win or lose points.

Finally, the Quest tile and the special card used when the cards were dealt with are removed from the game. The next hand will use a new special card and a new Quest tile.

Example: The victory condition chosen for this hand is: "Knights victory over Dwarves: +1 Point per Knight, -1 point per Dwarf".

At the end of this hand, each player looks at the cards collected in taken tricks and determines the corresponding score: Catie has 6 Dwarf cards and no Knight card. So she loses 6 points (-1 point per Dwarf, as announced by the quest).


Value of the Cards

The ranking of the cards is as follows (from highest, the Champion, to lowest, the 1):

Magic special cards have neither suit nor value. Their suit and rank depend on the circumstances in which they are played (and then forgotten).

Reminder: when scores are determined from the tricks taken by the players, these cards return to having neither suit nor value.

The player who scored the most points after seven hands is the winner.

In case of a draw, additional hands are played until there is only one winner. 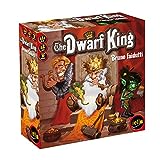