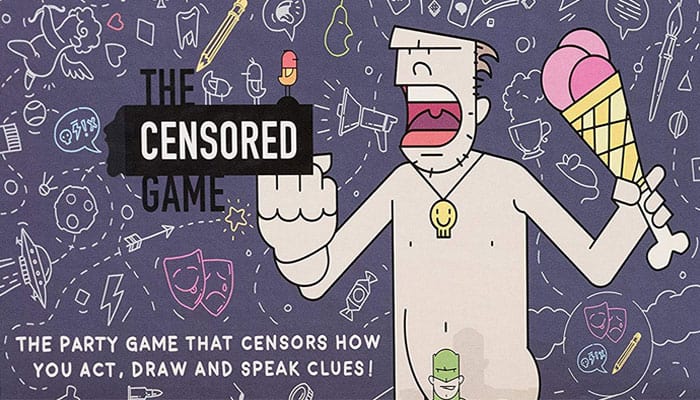 Separate CHALLENGE and CENSORED cards into two separate decks and place face down.

Divide players into two teams of at least two. There's no limit to how many players can be on each team.

Performers grab a pencil or pen and piece of paper to draw on.

Performers are not allowed to write words, letters, or numbers.

A performer may not speak or point to non-drawn objects either.

The performer is not allowed to speak or use sign language indicating specific letters or words.

Performers may use sign language for numbers except when the phrase has a number in it (e.g. 69).

A performer may only use something as a prop when required by a CENSORED card.

Performers may not say any of the white colored words in the definition of a CHALLENGE card - as well as any part of the word or phrase being guessed.

Performers are not allowed to gesture or point.

Spelling or intentionally rhyming words is also not allowed.

After the new card is chosen, the WILD card is shuffled back into the deck.

The first team to get seven CHALLENGE cards wins!

Players take turns as the performer. If the team fails to guess a phrase on any turn, or the performer fails to follow any rules, then the game is over.

This variation requires players to earn twelve cards instead of seven. This variation can be incorporated into normal or cooperative play.

Players must agree on which CENSORED cards they wish to use and remove the rest from the game. These remaining cards become the deck of CENSORED cards from which performers must draw during play.

The Uncensored variation requires players to act, speak and draw the dirty meanings, slang and sexual innuendos referred to in each CHALLENGE card.

If a performer performs a "clean" or literal meaning, then the CHALLENGE card is forfeited and play passes to the next team. In other words, naughty behavior is mandatory.