The Cat in the Hat Game Game Rules The Cat in the Hat has scattered things all over the house-can you pick up the most things before Mother gets home?

To collect the most Picture Cards.

The youngest player goes first. Players take turns spinning the spinner and moving the number of spaces shown. Play passes to the left.

The first time that a player ends a move on a space with a Picture Card, s/he picks up this card and places it on his Player's Square.

When a player collects a Picture Card, he stacks it on top of all the other Picture Cards on her/his Player's Square.

A player may only use the top Picture Card on his Player's Square to make matches; other cards can no longer be used and are kept stacked below the top card.

The player with the most Picture Cards wins the game.


The Cat in the Hat Game is designed for parents and children to play together. The rules are simple and the game is played in the same manner every time, so children can quickly become comfortable with the game.

This game teaches and reinforces early reading skills: children look for letters that form words and learn to recognize words as they see them paired with pictures. The game also features counting, matching, and introductory strategy skills.

Since the game is not over until the last player reaches Finish, every player stays involved in the game until the very end.

Players take turns spinning the spinner and moving along the board from Start to Finish.

The first time that a player ends his move on a space with a Picture Card, he removes that Picture Card from the board and places it on her/his Player's Square.

From then on, a player picks up another Picture Card every time that s/he ends her/his move on a space with a Picture Card that shares a letter or color with the top Picture Card on his Player's Square. When the last player reaches Finish, the player with the most Picture Cards wins the game.

The Cat in The Hat 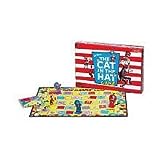 The Cat in The Hat Game

Cat in The Hat Card Game