Create the civilization with the most storied history, starting at the beginning of humankind and reaching into the future. The paths you choose will vary greatly from real-world history-your civilization is unique!

In Tapestry, you will advance on 4 advancement tracks (science, technology, exploration, and military) to earn progressively better benefits. Along the way, you will also improve your income, build your capital city, leverage your unique abilities, earn victory points, and gain tapestry cards that will tell the story of your civilization.

2 Tech cards (x33): Shuffle the tech cards. Place the deck face down next to the board and reveal 3 cards.

4 Territory (x48) and SPACE TILES (x15): Shuffle the territory tiles and place them in face-down stacks next to the board. Do the same with the space tiles.

5 Landmarks (x18): Place landmark miniatures on top of the matching slots on the landmark board. The extra landmarks go near the tech card deck.

6 Dice (one 12-sided & two 6-sided): Place the science die (green) near the science track and the conquer dice (red and black) near the military track.

(*) In a 1-3 player game, pair up the capital city mats based on the numbers on the board. Gain a random pair. Choose 1 and discard the other.

2 Income mat (x5): Seed each resource track on your income mat with the corresponding building (5 brown farms, 5 grey houses, 5 yellow markets, and 5 red armories). The far left space of each row is exposed. Place 1 token for each resource on the 0 space of the resource tracker at the bottom of your mat.

4 Player tokens (x13): Place 1 player token on each of the 4 advancement track starting spaces (far-left circles on the board) and 1 token on 0 VP. Keep the extras off to the side.

On your turn, you may either collect INCOME to begin a new era or ADVANCE your player token once on an advancement track (the 4 tracks along the sides of the board) by paying the cost and gaining the resulting benefit. Then play proceeds clockwise.

When you use your turn to collect income, you are beginning a new era for your civilization. Other than the first income turn to begin the game, players will end up taking income turns at different times.

Follow these steps in order (the chart on your income mat shows which of these apply to income turns 1-5):

Most turns in Tapestry will be used to advance on an advancement track. Follow these steps in order:

Each advancement track is divided into tiers. If you are the first player to advance into a new tier (II-IV) by any means, gain the corresponding landmark and place it in your capital city (see Buildings & Capital City).

Certain plots of land are impassable (

) - you cannot build there, but they contribute toward the completion of districts, rows, and columns.

There are 2 categories of buildings:

Other notes about buildings:

This capital city has 3 complete rows and columns, so each time you score it, you will gain 3 VP.

Civilizations: It is possible to gain additional civilizations (end of military track, tech cards, etc). If you do, add them to the left of your current civilization mat. If you run out of player tokens, use spare cubes.

Overlapping Turns: If your turn isn't impacted by decisions being made by the previous player, you may proceed to take your turn. This is particularly important during a player's income turn after they've played their tapestry card.

Optional Vs Mandatory Rewards: All bonuses in the game are optional. Benefits and landmarks are mandatory rewards.

): few elements of the game have you consider your neighbors. This refers to the players sitting to your immediate left and right.

Achievements: There are 3 achievements on the board. When you earn each of them for the first time, place a player token on the highest available VP space under that achievement. You cannot lose achievements or earn the same achievement twice.

Variable length: While each player will take the same number of income turns (5), the number of advance turns will vary.

AI Singularity: This technology track benefit may result in you having multiple player tokens on the same track. Either is eligible for advance turns. When considering the relative position on a track, only look at your most advanced token.

You cannot earn the same achievement twice. For the middle achievement, the 2 outposts you topple (from conquering or trapping) may be those of the same or different opponents. For the rightmost achievement, if an opponent plays a trap card as you attempt to conquer the middle island, you do not gain this achievement.

The game ends at different times for each player. Your game ends when you finish your final (5th) income turn. Gain benefits from your civilization, 1 upgrade, and victory points as shown on your income mat, but you cannot play a tapestry card or gain income.

If other players still have turns after your game has ended, you may still gain victory points from passive civilization abilities, but you cannot gain anything else.

When all players have taken their final income turns, the winner is the player with the most victory points.

In case of a tie, the player with the most total resources remaining is the winner. Otherwise, players share the victory. A great final score is 300 VP. 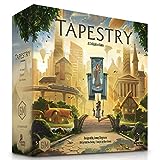