Unfold tho playing surface and lay it onto a flat surface preferably on a blanket or table doth, and smooth out all the wrinkles. If necessary, iron the reverse of tho pitch with a cool iron, under the supervision of an adult. Do not iron on the marked playing surface.

Place the goals on the goal line at either end of the pitch. The handle of the goalkeeper fits under the back of the goal.

The most popular line-ups are 4-2-4 and 4-3-3 but in Subbuteo any recognized line-up is allowed.

Place tho first or second finger of whichever hand is most comfortable behind the base of a figure. Press down gently on the surface with your 'flicking finger' and flick your finger at the base of the figure so that the figure moves forward and hits (kicks) the ball. Your finger or hand should never touch the ball.

Note: Only the nail part of the finger may be used when flicking, and the thumb must not be used as a spring.

The goalkeeper is on a specially designed playing handle which allows you to move your goalkeeper within tho goal and to block shots. The goal should be held gently with one hand and the goalkeeper moved with the other.

You must not flick the goalkeeper at the ball by the handle.

The game normally consists of two equal halves of 10 minutes with a 2 minute break after the first half. At the end of the first half both teams change ends.

At the end of twenty minutes (full time) the team that has scored the most goals is the winner.

If the match is a draw at full time, you may play extra time (two halves of three minutes). You can either add the goals scored in extra time to the final score or play for a 'golden goal' (the first team to score, wins).

In the event of a draw after extra time, you can play a penalty shoot-out to decide the winner.

The side in possession is the attacking team. The other side is known as the defending team.

Each team must be in its own half of the field at the kick-off, with the defending team outside the center circle.

The center figure in the attacking team now kicks the ball, which must go forward into the other half-of the pitch. If the ball does not touch an opposing figure then the team who kicked off still controls the ball.

The figure that kicked the ball may not touch the ball again until it has been kicked by another team mate.

The attacking team is allowed up to three flicks in succession at the ball with each figure and remains in possession until:

In all cases possession goes to the other team.

When passing, it is not necessary for the ball to hit the figure you are passing to. When the ball hits a figure after a pass, that figure is still allowed up to three flicks with the ball.

To try to break down an attack the defending team may take one 'blocking flick' after each flick made by the attacking team.

If you do hit them, the figures involved and the ball must be put back to their original positions and the defending team loses that 'blocking flick'.

The blocking flick should be used to obstruct the attacking team's move.

A goal can only be scored if the attacking figure is in the defending team's half and the ball is completely in the shooting area. Any goal scored from elsewhere is disallowed and the game is restarted with a goal kick.

However, all own goals, scored from inside the attacking team's own half, count as goals to the opposition. A goal counts as soon as the ball crosses completely over the line.

You do not have to wait for the goalkeeper to be ready.

If the ball goes over the side line, the last team figure it touches loses possession. The game re-starts with a throw-in. Each team is allowed to flick one figure into position, the attacking team flicking first.

The throw-in is taken with a flick but the figure must not cross the side line after taking the 'throw'. If he does the throw-in goes to his opponent. The figure which took the throw-in may not touch the ball again until it is first touched by another player.

Throw-ins can also be taken using the specialist throw-in figure.

If the ball goes over the goal line and was last touched by an attacking figure, the ball is put back into play with a goal kick. Place the ball on the corner of the goal area and use a nearby figure to kick the ball up the field.

The goalkicker must not touch the ball again until it is first touched by another figure.

Both sides can reposition their teams by placing them in any new formation, with the following restrictions:

Goal kicks can also be taken using the specialist Goalkeepers/Goalkicker.

If the ball goes over the goal line and it was last touched by a defending player, the ball is put back into play by a corner kick.

Place the ball and a figure on the corner spot. Each team may position by flicking three figures; the attacking team flicks first. The corner is taken with a flick and the figure that took the corner is not allowed to touch the ball again until it has first touched another figure.

If a winning result is required from a game but you have a drawn match, extra time or a fie breaker can be used to decide the eventual winner.

After a break, two three-minute periods are played. Change halves at half time.

If, after this time, it is still a draw, a 'Shooting Tie Breaker' is needed.

One of the goal areas is chosen and each team has five 'one-to-one' shots in succession from the positions shown.

The goalkeeper is not confined to the goal line, but he must remain stationary before the kick is taken. After each team has taken five shots, the team with the highest score wins.

If the game is still tied, continue with the 'Shooting Tie Breaker1 until one team has scored more goals. These extra shots should be alternated between each team.

When a penalty is awarded it is taken from the penalty spot and the following conditions must apply:

With an 'indirect' free kick the ball must first touch another figure before a goal is scored.

With a 'direct' free kick, a goal can be scored direct from the kick, providing that the ball is completely within the shooting area.

For a direct free kick within the shooting area, the defending team can place up to four figures to form a wall 9cm from the ball. This is in addition to the two flicks for marking.

When taking a free kick, there should be no defending figures within 9cm of the ball.

For free kicks, each team can flick two figures into a new position before the kick is taken. The attacking team flicks first. 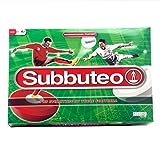 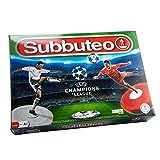