Pass Stinky Pig quickly...don't be stuck holding him when he toots!

Players sit in a circle. Place the pile of Tokens, as well as Stinky Pig and the Die, in the center of the circle.

The youngest player goes first. Hold Stinky Pig in one hand, and the Die in the other. Press the pig's belly, and when he starts singing, roll the Die!

The Die will tell you where to pass the pig:


Remember to roll and pass fast.. .at some point Stinky Pig is going to "pass gas", and you don't want to be holding him when he does!

Whoever is holding the pig when he suddenly makes a tooting noise, must take a Token from the pile. That player then pokes the pig's belly to start the singing again, and starts another round of play.

Keep playing until a player gets three Tokens.

The game ends when a player gets three Tokens. The player with the fewest Tokens wins (yes, there may be multiple winners)! Now play again! 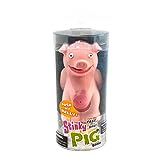