Stare! challenges how much players can recall about images they see on the game cards. Players move around the board by correctly answering questions about the images.

The first player/team to reach the FINISH triangle is the winner of the game. (Note: if you don't have much time, play until someone reaches the 'Short Game' triangle in the middle of the board).

If there are four or more players, divide into teams (it's fun to consult with teammates about guesses). Each player/team chooses a game piece and places it on the START triangle.

If it's your turn first, draw a card and then stare at the image for 20 seconds (an opposing player/team will flip the 10-second timer over twice). Try to memorize as much detail as you can.

Once time runs out, pass the card to the person/team to your left, who will ask you questions about the image (they should be careful not to let you see the image).

You then roll the die to see which question you will be asked first (e.g. roll a '5' and you will be asked Question '5'). Once you give your answer, the person/team holding the card looks at the image to see if you are right - they are the judge!

The 'judge 'should look at the image very carefully to see if the answer given is correct, because sometimes the right answer isn't obvious at first glance.

Every time you get a question right move ahead, and then roll again for your next question. (Note: Questions are organized so that ' 1 ' is usually the easiest question, and '6' the hardest).

Your turn continues until you either get a question wrong or until you roll the same number twice, which is called rolling out (meaning that you cannot answer the same question twice).

In either case, your turn is over and play passes to the next person (who draws a new card from the card box).

The winner is the first player/team who reach the finish triangle.

Here's an alternative gameplay that allows you to take advantage of all the questions on a card, and to gain spaces along the board more quickly. You DO NOT use the die, so put it aside. Instead, each player/team will be asked all six questions on the card.


Question 2 will then be asked (move ahead 2 spaces if you get it right, stay put if you are wrong), then Question 3, and so on until all 6 questions on the card are asked.

This means that if a player/team answers all six questions right, they would be able to move ahead a total of 21 spaces on the board (1+2+3+4+5+6).

You can't mix gameplays, so decide at the start if you want to play with the die or not. All players/teams must follow the same gameplay! 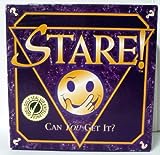