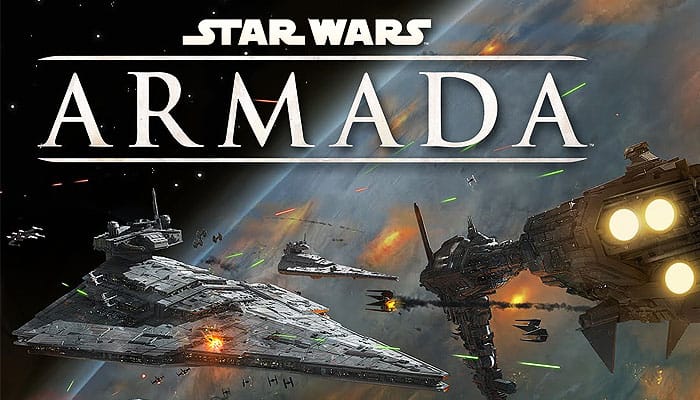 For the first game of Star Wars: Armada, players are encouraged to play the learning scenario. This scenario is designed for new players to quickly set up and play a game using only the essential components and rules.

After players have a better understanding of the gameplay concepts in Star Wars: Armada, they will be ready to build their own fleets and incorporate the additional game concepts described in "Expanded Rules".

Ships and squadrons are controlled by a player; therefore, when a ship or squadron is instructed to move, discard tokens, roll dice, etc., the player who controls that ship or squadron resolves those actions on its behalf.

The goal is to destroy as much of the opposing fleet's force as possible by the end of the sixth round. The game ends immediately if all of one player's ships are destroyed.

Star Wars: Armada is played over six rounds. Each round consists of the following phases:

At the end of the Status Phase, the player with the initiative token places the next highest round token next to the play area. Then the next round begins. Players continue playing the game until either one fleet destroys all of the other fleet's ships or the sixth round ends.

During this phase, players secretly and simultaneously use their command dials to choose commands for each of their ships. When revealed, each command provides that ship with a powerful bonus.

To choose a command, rotate the command dial so that the desired command icon is framed by the dial's fastener. Then place that command dial facedown next to the ship's ship card, placing it under any other command dials already assigned to that ship.

Since command dials are placed facedown, each player can secretly plan his strategy and keep his commands hidden from his opponent. The effects of each command are briefly described in the "Commands" sidebar.

During the Command Phase of each subsequent round, players choose on [y one command for each of their ships because each ship reveals only one dial during the Ship Phase. Since newly chosen commands are placed under existing commands, the players are often planning for future rounds.

When both players finish choosing commands for their ships, they proceed to the Ship Phase.

1. The Rebel player chooses a

command under the command dial that is already there.

Commands assist ships in numerous ways. A brief overview is presented below:

Squadron: Order nearby squadrons to move and attack early.

Concentrate Fire: Increase the power of one attack.


During the first round of the learning scenario, players might not know the game well enough to strategically choose commands.

If this is the case, they can use the following suggested commands by assigning them in the order presented so that the last command listed for each ship is on the bottom of its stack. During this phase, players take turns activating their ships.

The phase starts with the player who has initiative. He chooses one of his ships and activates it by performing the following steps in order:

After the ship finishes its activation, the revealed dial is placed faceup on the ship's ship card; a faceup command dial on a ship card indicates that the ship has activated this round. Then the opposing player activates one of his own unactivated ships.

If a player does not have any unactivated ships, he must pass his turn. This process repeats until both players have activated all of their ships.

During this step, the player reveals the top command dial on his chosen ship's stack of command dials and places it faceup next to the plastic ship.

If the player wants to resolve the revealed command for its full effect this round, he can spend the dial at the appropriate time to do so. If he wants to reserve it for a later round, he immediately spends the dial (placing it faceup on the ship's ship card) and places the matching command token next to the ship.

Command tokens provide players with flexibility, allowing them to use chosen commands in later rounds. However, command tokens produce a lesser effect than a command dial when spent.

During this step, the ship can perform up to two attacks. An attack originates from one hull zone, and the target must be inside that hull zone's firing arc.

The target of the attack can be either one hull zone of an enemy ship or one or more enemy squadrons. Then the attacker rolls attack dice in an attempt to damage the enemy target.

After a ship performs its first attack, it can perform a second attack, but the second attack must originate from a different hull zone.

During the first round of the learning scenario, players can skip the "Attack" step because their ships and squadrons will not be in attack range.

During this step, the ship must execute a maneuver; the player uses the maneuver tool to determine a precise position that the ship will move to. The distance the ship moves corresponds to its current speed, which is tracked on its speed dial.

To execute a maneuver with a ship, the player performs the following substeps in order:

The speed chart on the ship's card indicates how far each joint can be clicked away from the center position. Each column on the speed chart corresponds to the speed number at the bottom of the column.

A column shows the number of times that each joint can be clicked while going at that speed.

1. Each ship has four firing arcs. Each arc is the area between its firing arc lines, which are printed on the ship token.

2. Each ship also has four hull zones. Each hull zone is the area on the ship token between two firing arc lines.

The player places the maneuver tool on one side of his ship so that the plastic guides of the tool's flat end slide into the notches on the side of the ship's base. If properly inserted, the front of the ship should be parallel with the raised line above the guides.

The player presses the maneuver tool against the table and, without moving the tool, he picks up the ship. Then he places the ship at the joint below the punchboard number that corresponds to the ship's current speed. The notches on the ship's base slide over that joint's plastic guides.

Sometimes a ship's movement causes it to overlap a squadron or another ship.

After all ships have been activated, players resolve the Squadron Phase. During this phase, players activate any squadrons that were not activated by a O command during the previous phase. Each squadron that activates during this phase may either move or attack, but not both.

To move a squadron, the player places the range ruler on the table with the distance side faceup so that the distance 1 end of the ruler is in contact with any part of the squadron's base.

Then he picks up the squadron and places it at any point along the range ruler. The squadron cannot be placed with any portion of its base beyond the distance band matching the squadron's speed.

A squadron cannot be placed with any part of its base overlapping another squadron or ship.

The Rebel player activates an X-wing squadron and places the distance side of the range ruler faceup.

1 The X-wing squadron has a speed of "3", so it can move anywhere within distance 1-3, in any direction.

2 The Rebel player decides where he will move the X-wing squadron and places the distance 1 end of the ruler in contact with the squadron's base.

3 The Rebel player picks up the X-wing squadron and places it at the end of the distance 3 band. Then he removes the range ruler from the play area.

While a squadron is at distance 1 of an enemy squadron, those squadrons are engaged. An engaged squadron must abide by the following rules:

Engagement is an important element of strategy. Players can use a screen of squadrons to protect their ships, or they can aggressively maneuver their squadrons to pin down enemy squadron groups.

When a player activates a squad ron, he pushes its activation slider to the other side, showing a different color and icon.

At the end of this phase, the player with initiative places the round token with the next highest number to the side of the play area; the number displayed on that token indicates the round number for the next round. Then players begin a new round starting with the Command Phase. The players continue playing rounds until the game ends.

The game immediately ends when all of one player's ships are destroyed. That player is eliminated, and his opponent wins the game.

If neither player is eliminated after six rounds, the game ends and the player with the highest score wins.