Play it risky or play it safe.. .either way you just gotta stack it! Roll your dice and stack higher or lower numbers on the dice tower.

Just don't knock down the tower because you'll score a big fat zero! But if you get all of your dice on the tower before it falls, everyone else loses out!

Be the first player to score 20 points by rolling the right numbers and steadily adding them to the single tower!

Set the Quake Plate on a table so all players can reach it.

Each player chooses a colored set of Dice and Dice Cup. For two or three players, use all five Dice in your set. For a four-player game, each player should only use four Dice; set aside the fifth one in your set.

One player is the scorekeeper; find a pencil and paper to keep score.

The youngest player goes first, rolling all of their Dice at once.

If you fail to roll any qualifying Dice, your turn is over. When adding Dice to the tower, you may only add one at a time, and only use one hand.

You may NOT straighten the tower. You CAN shift the Die you are adding to the tower, but once you let go, you cannot touch it again.

Play passes to the left and the next player rolls their Dice.

You can add higher and lower all in one turn. Use a little strategy to be able to use more Dice!

The first player to reach 20 points is the winner! If there is a tie, those players play one more round to break the tie.

Note: You can store Dice in bottom of stacked Cups when not in use.

All rules remain the same except that you start the tower with two non-player Dice, with a 6 showing on top. This means only 5s can be added to start. 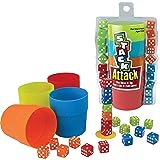