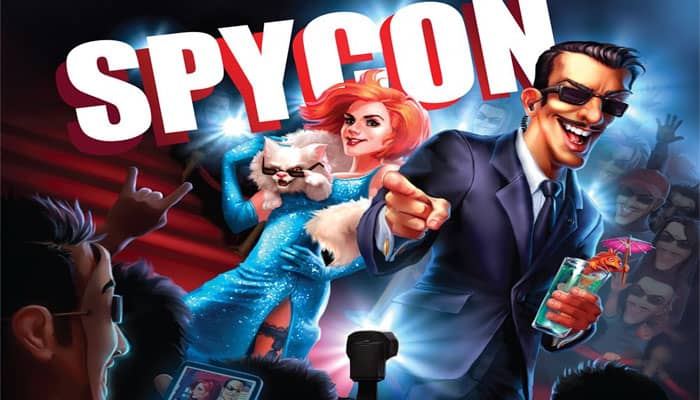 Players split up into 2 teams. The game is played over a series of rounds, during which 1 player becomes the Spy and receives a Character card.

The Spy's goal is to describe their Character in such a way that their team guesses who they are and the intercepting team cannot. Each team's goal is to be the First to guess the Character the Spy is talking about.

The intercepting team always gives the First answer when the game is stopped, but the Spy's team has a significant advantage: They know a Keyword.

The Keyword is a special item referenced by the Spy while they describe their character. The intercepting team has the full lists of Characters and Keywords.

The sooner the Spy's Character is guessed, the more points the corresponding team scores and the further their standee is moved along the Red Carpet made up of cards.

Whichever team makes it to the last card of the Red Carpet first wins.

Players split up into 2 teams of similar size and skill. Each team receives a Character sheet, Keyword sheet, marker, and Action deck with either of 2 backs. Each team places their Action cards in front of them, face-up.

). Place both Character sheets with the corresponding side up. Sort Character cards by symbols

on their faces into 2 piles. Take the corresponding Character deck, shuffle it thoroughly and place it in the middle of the table, face down.

Decide which keywords you want to use: A or B. Place both Keyword sheets with the corresponding side up. Sort Keyword cards by letters A and B on their faces into 2 piles.

Take the corresponding Keyword deck, shuffle it thoroughly, and place it next to the Character deck, face down. Put all unused Character cards back in the box and set aside all unused Keyword cards, away from the play area.

Study the list of Characters and make sure each player knows them. If any of the Characters seem unfamiliar to you, read their short overview at the end of these rules or search for additional information on the Internet.

At the start of the round, the team whose turn it is chooses 1 player to be their Spy.

The Spy looks at the Red Carpet card with their team's standee on it and reads its effect out loud. The effect is resolved either immediately or during the round depending on the card's text.

Then, the Spy draws the topmost cards of the Character and Keyword decks without showing them to the others. The Spy looks at both cards and passes the Keyword card to their team, face down.

The Spy starts talking about themselves as the Character. The other players don't know which Character the Spy is, but they have the full Character list on their sheets and they try to figure it out.

While describing themself, the Spy somehow tries to refer to the Keyword known by their teammates but not known by the intercepting team.

Restrictions for the Spy

The Spy may not:

Any player may ask the Spy a question, as long as they don't interrupt the Spy. The Spy may answer the question, but they also may refuse to answer it.

When the game is stopped for an attempt to reveal the Spy (see below), questions may not be asked anymore.

Exception for both cases: When the "Ask the Spy a question" Action card is used, the Spy must answer honestly, "Yes" or "No". See Action Cards on page 5.

Notes on the Sheets

All players within 1 team (except the Spy) may covertly discuss the Spy's possible identity and take notes on their sheets (e.g., write a question mark next to the Character that seems to fit the description and show the sheet to their teammates).

You may not show your notes to the Spy because they will start playing along.

Both teams have 3 shared attempts to reveal the Spy's identity. Each attempt consists of 1 guess by each team.

At any point during the game, any player (except the Spy) may stop the game to try and guess which Character the Spy is.

Regardless of who stopped the game, both teams make 1 guess each. The intercepting team is always the first to make their guess, and the Spy's team is the second.

The intercepting team has 30 seconds to discuss and make their guess.

Then, if the guess is not correct, it's the Spy team's turn to discuss the Spy's identity for 30 seconds and make their guess. If both teams don't guess the Character correctly, the game continues and the Spy may keep going with their description.

If the Character is named correctly, the Spy reveals their Character card.

Then, both teams cross that Character out on their sheets and the team that got the Character right scores victory points (VPs) and moves their standee along the Red Carpet as follows:

The round can end in 3 ways:

At the end of the round, the Spy discards their Character card so everyone can see it. Both teams cross that Character from their sheets since that card is out of the game now. The Keyword card is shuffled back into the Keyword deck and might be drawn later in the game.

It's the other team's turn to pick a player to be a Spy, and a new round begins.

While advancing along the Red Carpet, both teams will apply additional effects from the cards. Some of the effects are resolved at the beginning of the round, some of them at the end. The "Start" and "Victory!" cards don't have any additional effects.

Important: You must resolve only the effect of the card that the spy team's standee is on.

On one hand, it's better to wait until the third attempt to score more VPs. On the other hand, someone else might prefer not to wait and guess the Spy's identity earlier.

The teams have a maximum of 2 attempts to reveal the Spy: The round is over after 2 failed attempts instead of 3.

The Spy draws another Keyword: At the beginning of the round, the Spy draws an additional card from the Keyword deck, looks at it, and gives it to their team, saying "This is the second Keyword". Now, the Spy may use both Keywords during their description.

The Spy reveals 3 Keywords from the deck: At the beginning of the round, the Spy draws the 3 topmost cards from the Keyword deck and lines them up, face up, next to the Red Carpet.

The intercepting team now knows that those Keywords are out of the current round. At the end of the round, the Keywords are shuffled back into the deck.

Now, their goal is to describe the Keyword based on the Character, while both teams try to guess the Keyword. All other rules stay the same.

Each team has a set of 7 Action cards. They provide a significant advantage, but each of them can only be used once. Action cards belong to the whole team, and any player of the team may resolve an Action card if their teammates agree. Once an Action card is used, discard it into the box.

In addition to the usual restrictions, you may not ask if it's a certain Character or a Keyword. For instance, you may not ask: "Is it Cleopatra?" or "Is it an umbrella?"

Make 2 guesses per attempt: During your attempt to reveal the Spy, before naming a Character, discard this card in the box and name 2 Characters. If 1 of them turns out to be correct, you score VPs. The 2 guesses are considered a single attempt by the team to reveal the Spy.

The Spy crosses out a quarter of the Characters: At any point during the game, discard this card to make the Spy cross out a whole quarter of Characters (1 of the 4 parts of the list) on both teams' Character sheets (it must be the same quarter for both teams).

The Spy's Character must not be among the ones crossed out. Thus, the list of Characters shortens significantly. This card can be resolved after the intercepting team's guess.

The Spy draws 2 Characters instead of 1 and keeps 1 of them: At the beginning of the round, discard this card to make the Spy draw 2 Character cards, pick 1 of them, and shuffle the other back into the Character deck.

The Spy draws another Keyword: At any point during the game, discard this card to make the Spy draw an additional card from the Keyword deck, look at it, and give it to their team, saying "This is the second Keyword".

Now, the Spy may use both Keywords during their description. If there are several cards of the same kind played, their effects stack ("This is the third Keyword", "This is the fourth Keyword", and so on).

If you want to make it harder, don't use Action cards at all or reduce the number of cards.

Whichever team's standee is the first to get to the "Victory!" card on the Red Carpet wins the game.

Tips for the Spy:


Tips for All Players: 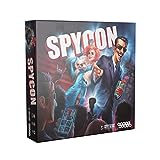