Spot it! consists of 55 cards, with 8 symbols per card from the 50 available.

Each card is decorated with universal images or words for early readers, including sight words.

There is only one identical symbol in common between each card, it is up to you to find out which one.

Practicing reading comprehension has never been so much fun! Focus your eyes, ready your hand and put your brain to work.

Look for the identical symbol between the two cards (same shape, same color, only the size can be different). The first player to find the right symbol names it out loud and draws two new cards which are then placed face-up on the table.

Repeat this until each player understands that there's always only one identical symbol between two cards. That's it, now you know how to play Spot it!

You can also try to familiarize yourselve by playing "TWINS".

In case of doubt?

It's the first player to have named the symbol who wins! If players have spoken at the same time, it's whoever has taken, placed or discarded his or her card first who wins.

No matter the game, you always need to be the fastest to spot the identical symbol between two cards, name it out loud and then take the card, place it or discard it depending on the rules of the mini-game you're currently playing.

Spot it! is a series of fast, challenging mini-games in which all players play simultaneously. You can play them in any order, or only play your favorites.

The bottom line is to have fun! It can be helpful to first play a few practice rounds to make sure everyone understands the rules. The player who wins the most mini-games is the champion.

Don't hesitate to have a practice round to make sure every player understands the rules.

At the end of a mini-game, the tied players duel (or have a round of "hot potato" if there are more than two).

They each draw a card and reveal it at the same time. The first one to find the identical symbol and name it out loud wins the duel.

The player who has won the most mini-games wins the game.

For tournament lovers, a point system is offered:

Start with the "the towering inferno", the loser chooses the next mini-game. 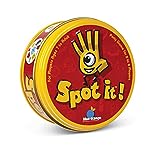 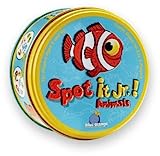