Get four of a kind and grab a spoon! Once a spoon is grabbed, everybody grabs for the rest. Don't be the one left without a spoon!

In each game, you will use one less spoon than the number of players.

For example, if there are eight players, you will use seven spoons. Arrange the designated number of spoons in the center of the table so they will be easy for all players to grab, and place the others back in the box, out of play.

Everybody takes turns being the dealer. When you're the dealer, shuffle and deal four cards to each player, including yourself. Place the remainder of the deck in a stack, face down in front of you.

Once everybody has had a chance to pick up their cards and arrange their hands, take a card from the stack, and determine if you want to use it to replace any of the cards in your own hand. Remember, you're trying to get four of a kind.


Players around the table simultaneously pick up cards from the player on their right and opt to keep them or pass them to their left.

As the dealer, start out picking up and passing cards slowly, and speed up the pace as you go through the deck. There will be a lot going on with the passing of cards and it will become more and more difficult to watch your hand and watch the spoons!

If you come up empty-handed when all the spoons are taken, you're out for the game. No big whoop - games are really fast. The remaining players remove one spoon from the previous round, set them up again and play. Each round somebody will be eliminated.

The player to grab the last remaining spoon is the winner! 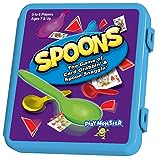 Spoons - The Game of Card Grabbin' 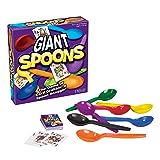