You are a monkey in the jungle when one day a wayward carnival makes a stop. You and your fellow monkeys jump in the bumper cars and away you go.

You have no idea why there is fruit all over the arena floor, but you aim to grab as much of it for yourself as possible!

Set the banana peel tokens aside for now.

Deal 5 cards to each player (face down).

Each card has a degree of clockwise rotation showing how much a bumper car will rotate clockwise before it moves forward.

Rotation is always clockwise. Some cards have special text.

Each player takes a green-and-red banana/peel token to keep track of player's turns. After each player has taken her turn, she flips her banana token from green to red.

Choose and Play a Card

Players select the card they want to play and place it face down. When all the players have a face-down card in front of them (their play area), they simultaneously flip them face up.

At this point, special text cards that say "use when revealed" are resolved before any bumper car movement.

At the start of a players movement, she rotates her bumper car clockwise so that the arrow on the car rotates to the degree indicated on the card in play.

If at the start of the game she wishes to adjust her monkey's initial starting direction, she can do so before cards are flipped. This can only be done on the first turn.

(At game start, ties do not need to be resolved because the monkeys start too far away from each other to matter).

To move, a player rotates her bumper car clockwise to the degree on the card. Then she moves her monkey in the direction of the arrow. The number of junctions to move is determined by the number of cards in her play area (i.e., the player's speed).

She puts any fruit her monkey drives over face down in her play area. If she takes a banana, then she puts a peel from the reserve onto the now empty junction.

Special text cards that say "use during movement" are resolved during the player's movement according to the card's ability.

Once all players end their movement, they flip their banana/peel token from red to green and select their second card from their hand, leaving the card they just played in their play area. When they flip the new card, they place it to the right of the previous card.

Play follows in the same way as the first round, except now each monkey has a speed of two cards and so moves two junctions.

Play continues until all five starting cards have been revealed. Then players refill their hands with five new cards from the deck and resume play. The face-up cards remain in their play areas. There is no limit to the number of these cards.

Slipping on a Banana Peel

When a bumper car runs over a peel, the player draws a card from the deck, then rotates her car to the shown degree and continues any remaining movement.

If there is special text on the card, she ignores it. She discards the card and banana peel.


Running Into the Arena's Edge

When a player runs a bumper car into the edge of the arena, she pauses her car. In order to keep moving, she rotates her car clockwise in 45-degree increments, represented by dashes on the edge of the board.

Each time a player rotates her car 45-degrees, the player discards her earliest played card. She continues to do this until her bumper car is facing a free path. If she still has remaining movement, she continues to move it in that direction, but cards are no longer discarded.

Example Of Running Into The Arena's Edge:

In most games, the cars eventually bump into each other.

When a player's car is moving towards another player's car and lands in an adjacent space with movement left, it is considered a collision. The active player then stops moving, takes a random fruit from their play area, and discards her earliest card. Her movement is over.

The player of the bumped car then draws a card from the deck and rotates her car the shown degree on that card.

Then, like with real bumper cars, her car receives the momentum of the car that bumped her. Her car is pushed away from the other car for the total number of junctions remaining in her movement.

She picks up any fruit her car runs over and places banana peels as necessary. If her car bumps an edge before full movement is spent, she stops her car and the turn is over.

A bumped car does not lose cards for running into the edge of the arena. If her car is against an edge when she is bumped, it does not move at all.

If a bumped car, due to the momentum and movement that was passed to it, bumps another car, that third car's player draws a random card from the deck and rotates her car to the shown degree on the card.

She uses any remaining movement from the first car to travel that many junctions until she bumps an edge, runs out of movement, or bumps yet another car, which continues the chain.

When only one type of fruit is left in the arena (not counting banana peels), the game is immediately over. The players turn over their fruit tokens and count up their hauls. 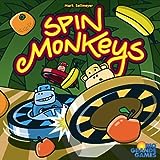