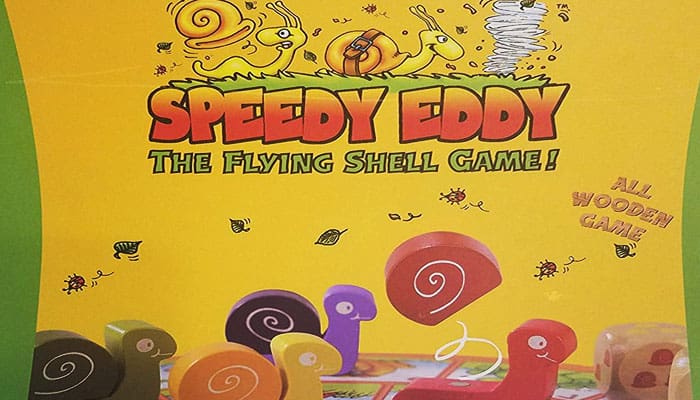 Somewhere in a secret vegetable garden, a few intrepid snails are preparing for the most exciting race of the gear.

Watch out for mole holes, dodge flying carrots, and beware of the strong winds as your snail may lose its shell!

Hope the winds of chance blow your way to get you to the finish line first and win the famous Speedy Eddy Trophy!

The first snail to finish the race wins, with or without a shell on its back.

Players choose a snail with its shell on and take turns throwing the dice.

With their aerodynamic racing shells on, the snails are fearless and really fly I

Without them, they are sluggish and shy. The goal is to rush through the swirling winds by keeping a shell on the snail's body.

The shell does not have to be the snail's original shell - players can play any "free shell" they want.

A "free shell" is a shell detached from a snail body.

Special squares only apply to complete snails (a snail with a shell on its back) landing on these squares.

Do not apply to snails reassembled on these squares.

You roll the dice again.

You collect one belt chip. Give that chip back the next time you fall on a strong winds square to keep your shell on your back.

The mole hole takes you to the square indicated in the hole.

The snail stops for a snack.

Only a matching pair of dice will get you on your way again.

You just got knocked out by a flying carrot. You lose your next turn.

The First Snail (with or without a shell on its back) to cross the finish line wins the game.