Your mission is to carry on your ancestors ' honorable task of traveling the world to deliver essential goods to the inhabitants of both hemispheres.

While the Day people want you to deliver stones and water, rare in their hemisphere, the Night people sorely need wood and wheat to survive. Be efficient and outpace your opponents to collect the most gold stars by the end of the game!

1 Assemble the gameboard ging the 5 strips in either the order | day/day/dusk/night/night.

3 Sort the Delivery tiles and arrange them in 2 face-down decks: a Day deck and a Night deck. Create a display as follows:

4 Each player: Choose a player color, and set the player board of that color in front of you, summer side

5 Each player: Shuffle the deck of Airship cards of your chosen color to form your personal deck, and place it face down to the left of your board.

6 The player who most has "their head in the clouds" is the first player.

Place your resource on a storage space of your player board.

7 Place the Gold tokens and the resources nearby, in reach of everyone, to form the reserve.

8 Each player draws 3 cards from their personal deck. Now the game can commence!

The game spans a series of rounds, during each of which, each player plays one card from their hand. The game ends when each player has played all 16 of their cards.

At the start of your turn, you have 3 cards in your hand (except for the last 2 turns of the game, of course). Starting with the first player and continuing clockwise, each player MUST play a card on the gameboard, which is composed from the strips.

You must respect the following rules:

It is possible for you to lengthen your voyage, which is to say not respect the adjacency rule. In order to do this, you must spend one resource (from your storage) per space (empty or occupied) between the Airship or one of your cards, and the space you wish to reach.

Discard the resources you used this way, returning them to the reserve.

Note: The resources can be of any type(s).

You can play the card on either of the following:


Playing on a Floating Production Island

Gain as many resources as the value of the card you played (either 0, 1, or 2 resources) of the type corresponding to this space (visible through the porthole in the card). Place each resource you gain on a storage space on your player board.

Important: You can never keep more than 8 resources. If you ever have more than 8, you must immediately discard resources of your choice until you have only 8.

Playing on a Hoating City

Then, you MUST fulfill a Delivery tile by delivering the resources depicted on it.

Take the Delivery tile and place it in the first empty slot of your player board: day tiles go above it, night tiles go below it. Return the delivered resources to the reserve, and immediately reveal a new Delivery tile of the same type to refill the display.

Placing a Delivery tile immediately earns you the bonus depicted by the slot on your player board (you earn the bonus after the display has been refilled):

At the end of your turn, resolve the power (see next page: Powers of Expelled Airship Cards) of each card on the first strip. Then, return these cards to their respective owners' discard piles. Flip the first strip over and place it as the last strip; then, shift all the strips to keep the board in the same position on the table.

Example: Noelie played a value-0 card on a floating night city 1. So, she immediately advances the Giant Airship figurine 2. She returns a wood, a stone, and two wheat to complete the night delivery3, and places the Delivery tile in the first empty night slot below her board.

Finally, Noelie flips the first strip and moves it to the last position, and shifts all the strips to keep the gameboard in the middle of the table 6.

Gain 1 or 2 resources produced by the island on which the card was lying (or gold stars if it was on a city).

Gain 1 copy of the resource indicated on the card, regardless of the type of island/ city on which the card was lying (here a

Gain 1 copy of each resource indicated on the card, regardless of the type of island/ city on which the card was lying (here a stone and a wheat).

The game ends after everyone has played all 16 of their cards (and after resolving any expelled cards, if the Giant Airship advanced).

For every 2 remaining resources on your storage spaces, you also earn 1 gold star. Add the gold stars of your Delivery tiles and all those earned over the course of the game.

The player with the most gold stars wins. In a tie, the tied players share the victory. 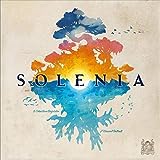 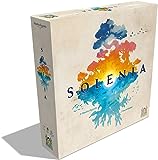