The construction of the temple dedicated to Sobek is in full swing. A whole economy has set up next to the construction site: there's a new market, and the feluccas sailing up and down the Nile are constantly bringing goods of all sorts.

Competition between merchants is naturally fierce and some are prepared to become corrupt beyond reason in order to amass glory and riches. Mainly the riches, in fact...

You too are part of the local merchants' guild and are prepared to do whatever it takes to beat your rivals...

You have 3 rounds in which to acquire more money than your rivals, but try not to become too corrupt!

A goods card in detail:

There are two types of card for each good: those with a trade value, and those without.The ivory card below has no intrinsic value.

The 3 points on the border are a reminder that cards in this family with a trade value have 3 scarabs.

A character card in detail:

Each character card also belongs to a goods family. In addition to the color of the card's border, this is also shown by the appropriate icon (here, ivory).

Each character has a special power whose effects are explained in detail at the end of this rulebook.

The power is shown in the papyrus at the bottom of the card.

During a round, a character card can be played either as a goods card or as the character using their special power, but never both.

Randomly decide who will start the first round. You are now ready to start playing.

On your turn, you must choose one (and only one) of the 3 actions shown opposite.

After which, your turn ends and it is now the player on your left's turn to choose one of the 3 actions, and then the next, etc.

The 3 different actions possible are:

NB: the choice is more restricted when there are fewer than 4 cards:

You decide to take the amulet (3). Since you are skipping the wheat (1) and the marble (2), you must put the latter two face down under your corruption tile.

The corruption rule applies regardless of the type of card taken (goods or character).


B. Play a Character

As long as at least 1 of the 5 tokens hasn't yet been played, playing a set immediately triggers an event.

The round has ended and you still have 7 cards in your hand.

A The fish card is added to the corruption pile since it is the only one.

B The marble cards likewise since 2 cards are not enough to create a set. The character cannot be played since the round is already over.

C The 3 wheat cards and the wheat character cannot be added to the wheat set already on the table. However, since there are at least 3 cards, they can be played as a new set, horizontally (in order to distinguish them from sets played during the round).

The round is now scored.

Each set of cards is scored separately. Each set scores points as follows: Number of scarabs x the number of cards

Scarabs are added together for horizontal sets rather than being multiplied.

The sum of the points is your score for the round, which is added to the scoring track.

In this example you scored 23 points

Now it's time to settle debts: each player adds up the number of cards under his corruption tile.

The player who has the most cards is going to lose some points: For every 10 points scored during this round, he moves back along the scoring track to the next symbol of the same type that his marker just ended up on.

You're playing Blue. You had 38 points before this round's scoring and you have the most corruption cards.

Your sets earned you 23 points and so your score is now 61.

Your excess of corruption has cost you 9 points out of the 23 earned in the round. Not to be repeated too often!

The new round uses all the cards (including those under the corrup- tion tiles) and tokens.

Set-up is exactly the same as at the beginning of the game.

Once the round is set up, the player with the lowest score decides who will be the starting player. He can choose himself if he wishes.

The game ends after the 3rd round is scored. The player with the most points wins.

In the event of a tie, the players concerned share the victory. A game finishes early if any player has more than 100 points at the end of the 2nd round (after taking into account the corruption penalty). 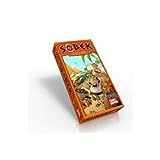