Snug as a Bug in a Rug Game Rules 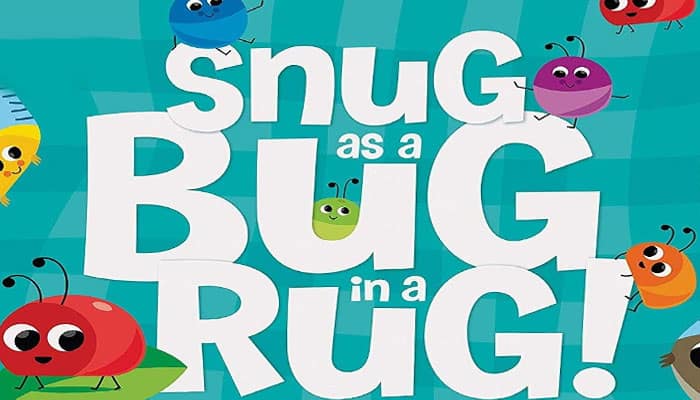 SnuG as a BUG in a Rug! is a great way for young kids to learn colors, numbers, shapes, counting, and the concepts of big and little. In addition, children practice rolling a die, spinning a spinner, and taking turns.

The game has three levels of play. As a child grows, she moves to the next level of play, adding complexity at each level. In addition, children of different ages can play together, each at his own level of challenge.

The object, game end, and set up are the same for all 3 levels of play.

Before playing the first time, pop out all the bugs.

All the colorful bugs love to play under the rug! Help all of the bugs get snug under the rug before the 3 stink bugs stink up the place!

In other words, the object of the game is to get all the colorful bugs under the board before the 3 stink bugs are on top of the board.

Roll the die once and then put it aside for the rest of the game.

All players will be making color matches throughout the game

Players take turns. On your turn, spin the spinner and then find a bug that matches the color the spinner indicates. When you find one, pick it up and slip it completely under the board.

If you can't find a bug of that color and want some help, ask the other players to help you. This is a cooperative game and cooperating is part of the fun! It is now the next player's turn.

The next player spins, finds a bug of the indicated color, and slips that bug under the board. Continue taking turns and matching bugs until the first time no one can find a bug of a matching color.

When this happens, place a stink bug on the board. Uh oh, hold your nose, it's starting to get a bit stinky in here! At this point, all players STOP looking for color matches.

From now on, you'll look only at the eyes. Continue to take turns spinning the spinner and looking for bugs with either big eyes

depending on where the spinner stops. If you cannot find a bug with the right-size eyes, place another stink bug on top of the board.

Keep taking turns until either all the colorful bugs are under the board or 3 stink bugs are on top of the board.

For example, if you rolled NUMBER, look at the number indicated on the spinner.

As in Level 1, the first time no one can find a bug that matches, place a stink bug on the board. Now put the die away for the rest of the game. Open your eyes really big and continue taking turns spinning the spinner and finding only matching big eyes or little eyes.

Keep taking turns until either all the bugs are under the board or 3 stink bugs are on top of the board.

Level 3 challenge! No die is needed in Level 3. On your turn, spin the spinner and then find 2 attributes that match 2 rings indicated on the spinner.

In this example, the player would look for a bug that has any 2 of these attributes: yellow, 1 spot (of any shape), circle (of any number), or big eyes.

Keep taking turns until either all the bugs are under the board or 3 stink bugs are on top of the board.

Snug as a Bug in a Rug