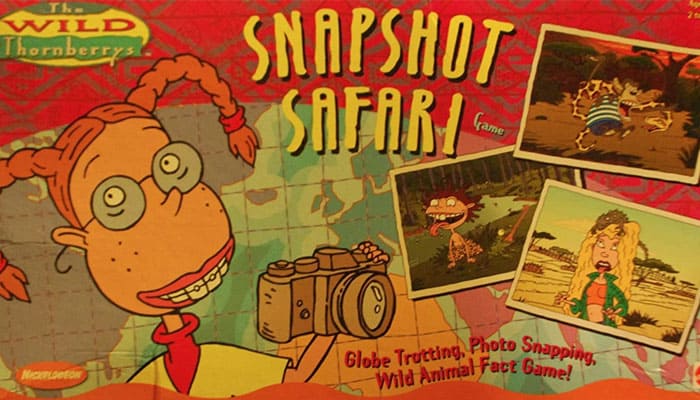 Collect points by "taking pictures" of the animals on the map. Be the player to collect the most points after all the players get back to the Commvee to win the game.

All players roll the die. If you roll a compass, roll again. The highest roll goes first.

The first player rolls the die and can move up to the number on the die. Your goal is to land on the Animal Photo on the board and "take" that corresponding Photo card.

The board is divided into spaces by longitude (running North and South) and latitude (running East and West). You may move your Character Mover in any combination of right (east), left (west), up (north) and down (south) directions around the board.

Each time you "take" a picture, turn the Animal Photo Card over and let Eliza tell you fun facts about the animal. Read the card out loud so everybody can hear and learn. Colored swooshes extending from the Animal Photos on the board also show you where that animal lives in the world.

Two players may not occupy the same space. So, you cannot move to a space that is already occupied by another Character Mover. Simply move around them.

Play passes to the left (clockwise).

Since the world is round, you may travel around it! You can "jump" to the opposite side of the map by exiting the far northern edge and re-entering the corresponding space on the southern edge. (Use the letters to guide you).

This also works for eastern and western crossings, left to right on the board. (Use the numbers to guide you).

If you land on a compass square OR if you roll a compass on the die, draw a Compass Card. Be sure to read the card out loud and follow the directions on it.

For example, if you draw the Compass Card that reads, "The eagles are migrating.

If there is already another player on the space when you get there, send them back to the space you just came from. Remember which space you moved from!

If you draw a Compass Card that instructs you to do something that you cannot do, roll again.


The Race Back Home

When all of the Animal Photo Cards have been collected, it's a race back to the Commvee! The first player back wins the corresponding Reward Card for his/her Character Mover.

Each Reward Card is worth three bonus points, so only the player who gets to the Commvee first is rewarded with three extra points. Once the first player gets back to the Commvee, the game is over.


Tally up the score. Remember: Animal Photo Cards are worth 1 point; the Reward Card is worth 3 points.

When all the Animal Photo Cards have been collected and a player has returned Home, the game ends. The player with the most points wins!

Game 1: Players decide ahead of time how many Animal Photo Cards a player needs to win.

The first player to collect that number of Animal Photo Cards wins and gets to collect their special Reward Card.


Game 2: Players set a time limit before beginning play. For example, set the timer for 20 minutes.

Once 20 minutes is up, the player with the most Animal Photo Cards wins and gets to collect their special Reward Card.