Potato Charley's infamous smuggling gang is seeking new members. It doesn't take long for the first contenders to arrive - but who is skilled enough to become a worthy member of the gang?

To decide on this matter, big boss Charley himself stages a smuggling contest. It consists of two parts. First, the aspiring smugglers must try to get a piece of contraband that is hidden inside a potato sack of the largest possible size to pass through a hole in the training fence.

Afterwards, those who succeed have a good chance of inspecting the potato sack belonging to another contender whose potato sack is smaller or a potato sack that shamefully got stuck in the hole in the fence.

As a reward, smuggle tokens depicting sweet treats or sour treats are given. But also stink bombs are awarded and can cause a few surprises.

The first player to have collected a certain number of smuggle tokens wins. to win, you need to collect either:

The intelligent modeling putty knows your needs! It is odorless and non-greasy. No residues will stick to your hands, and it will never dry out. But watch out: If made into a sphere, it can dart away like a bouncy ball.

Please note: Like chewing gum, modeling putty that comes in prolonged contact with textiles is very difficult to remove.

Before your first game, carefully remove all parts from the three die-cut sheets. Assemble the scale by sliding the board of the scale through the slot of the scale base until reaching the marking in the center of the board so that the scale is balanced.

Each player receives 3 pieces of contraband (1 yellow, 1 red, and 1 purple) and places them behind his or her privacy screen.

The privacy screen should be placed in such a way that none of the opponents can see what's behind it. Fold the upper flaps slightly downward and the lateral flaps slightly inward.

Place the rolling track in the center of the table.

Put the smuggling aid into the corresponding depression in the upper part of the rolling track so that the arrows point to the right when viewed from the front.

Place the game board in front of the rolling track. Three rooms are depicted on the game map: the junk room, the bar, and the boss's office.

Position the scale in the unoccupied corner of the boss's office. Insert the boss into the slot behind the circle in the center of the smuggling aid.

Place the smuggle tokens, the hourglass, and the die beside the game board.

A third player would take any 1 sweet treat and a fourth player any 1 sour treat. Each player places their token in front of their privacy screen so that all players can see this token.

Note: It doesn't matter which sweet or sour tokens you take at the beginning of the game or anytime later in the game. All sweet tokens count the same toward winning.

All sour tokens count the same toward winning. But it's nice to have the choice, isn't it?

The game consists of several rounds. Each round comprises 3 phases:

In this phase, each player uses their modeling putty to sculpt 1 sphere that they must roll through an opening in the training fence. These spheres represent your sacks of contraband.


A. Determining a New Hole in the Fence

The oldest player is the starting player of the current round. He or she rolls the die and moves the smuggler boss forward - in the direction of the arrow - as many slots as the number he or she has rolled.

The track the boss now stands behind leads to the hole in the fence that all players must use in this round.

If the player moves the boss beyond the side of the rolling track, he or she simply returns him to the other side and continues counting from there.

Important: If the player rolls a red number (5 or 6), for the time being the boss remains where he is and the player only flips the hourglass.

To learn which hole in the fence applies in this round, you must wait until you have sculpted your spheres (more about this topic on page 5, Special Case "Red Number on Die").

B. sculpting the sphere and hiding 1 piece of contraband inside

While the hourglass runs, each player sculpts a sphere and hides either 1 red (sweet treat), 1 yellow (sour treat), or 1 purple (stink bomb) piece of contraband in it.

Important: Each player must hide exactly 1 piece of contraband. They may not hide more than one piece in their sphere and may not forgo hiding a piece either.

Should this nevertheless happen, the inspector has guessed correctly in any case and may take any 1 piece of contraband from the supply (see also "Inspection").

The sphere should be as large as possible but not so large that it gets stuck in the hole in the fence. When sculpting, please note the following:

Hint: When playing the game for the first time, it isn't all that easy to gauge the appropriate sphere size so that the sphere fits through a hole in the fence.

Therefore, you first should sculpt a couple of test spheres before beginning the actual game.

The starting player places his or her sphere on the starting position of the current rolling track. Then he or she gently pushes the sphere so that it rolls toward the hole in the fence.

Important: Two spheres will adhere to one another if they touch, and they may not separate cleanly when you try to separate them.

Therefore, you should first remove your sphere after it has passed through the hole in the fence before the next sphere is rolled down the track.

If you place spheres in one of the rooms depicted on the game board, make sure to place them separately on the stools or barrels, so that there is sufficient space between them.

First Sculpt the Sphere, Then Determine the Hole

Therefore, you do not know which hole you will have to roll your finished sphere through. If you don't want to take risks, you better sculpt a small sphere.

However, if you're not afraid to take risks, you sculpt a larger sphere. Maybe a larger hole in the fence will be determined, and you'll have a chance to obtain a good ranking.

Important: The starting player doesn't roll the die until the hourglass has run out. This time, the number rolled definitely counts - even if it is a red "5" or "6" again.

Important: In a 2-player game, only the armchair marked with a "1" is occupied by a sphere. The player who has the smaller sphere must place it in the junk room.

Note: During the subsequent inspection of an opponent taking place in the junk room, you only have a chance to win 2 smuggle tokens this turn if you have obtained a seat in the boss's office (see "Inspection").

If you can't discern clearly which sphere is larger, make use of the scale. The heavier sphere is also the larger one.

If, in rare cases, 2 spheres have the same weight - that is, none of the two sides of the board of the scale clearly touches the surface of the table - roll the die to determine whose sphere shall be considered larger. The player who rolls the higher number wins.

Even though you've made it through the hole, there's no need to put such silly grins on your faces! Now I want to see who is better at playing the role of a customs inspector. V


A. Who Inspects Whom


B. How Is the Inspection Performed

The inspector names the piece of contraband he or she believes to be hidden inside the opponent's sphere, saying either "sweet treat", "sour treat", or "stink bomb".

Then the opponent must open his or her sphere and show what is hidden inside. Now there are 2 possibilities:

In this case, the inspector receives nothing. Depending on what the inspected player has smuggled, the following happens:


C. The players who were not inspected reveal their pieces of contraband

After all inspections have been performed, the players who have not been inspected reveal their respective piece of contraband. The players in the boss's office begin, in the order of the places they occupy.

If a player in the junk room wasn't inspected, he or she is the next one to reveal his or her pieces of contraband.

Note: In a 4-player game, it may happen that two players in the junk room were not inspected. If so, the player who sculpted the smaller sphere may reveal his or her piece of contraband first.

Note: If none of the opponents have any smuggle tokens, the player takes any 1 smuggle token from the supply.

After finishing a round, the next player in clockwise order is the new starting player and receives the die. Then the game proceeds as described above.

The game ends immediately after a player has accumulated the following smuggle tokens in front of his or her privacy screen:

That player has won the game and the game ends.

Important: When a player wins, the current round is not played to the end. The other players no longer get their turns.

If you want to familiarize yourself with the game a little faster, you can agree to reduce the number of smuggle tokens required to win the game. In this case, the first player to have accumulated the following tokens wins: 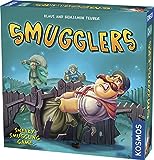