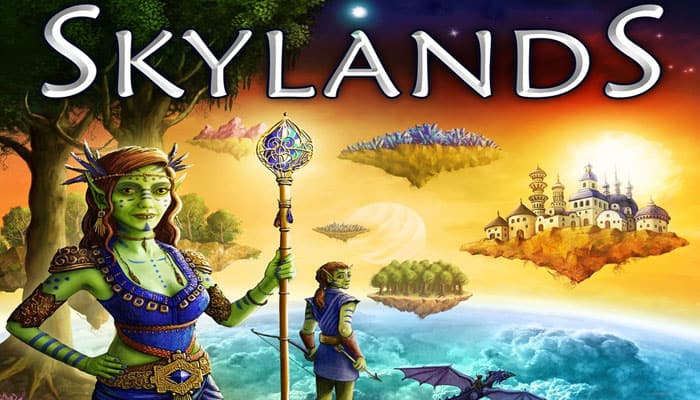 The world of Skylands has failed, leaving behind only the fragments of floating islands. However, using their skills as mystics, the inhabitants can rebuild the islands and cities of their home world.

To do so, they will need to harness the energy of the woods, mountains, and crystals, enabling them to create special new islands and supply energy to their cities.

Each player creates their own world of islands by placing island tiles on their player board, forging new islands made entirely of woods, mountains, or crystals; or cities used for scoring victory points.

On their turn, a player will take one of the four possible actions. Not only will that player perform the action, but also the other players, although the active player will gain a bonus.

The game ends after one player has covered the penultimate square on their board or when the supply of islands or victory points has been exhausted. All players will add together their victory points (VPs), and whoever scored the most wins the game.

The Islands of Skylands:

Setup is complete and the game is ready to start.

The rules for placing tiles apply to all island and all special island tiles. Once placed, tiles are not allowed to be turned or relocated.

Skylands is played over a series of game rounds. During each round, the starting player begins, and the other players follow in a clockwise direction. A player performing their turn is referred to as the active player.

When starting their turn, the active player relocates their player token from its current position on one action board to one of the three other action boards.

First game round: During the first round, the active player puts their player token on any action board of their choice. Any number of player tokens may be on the same action board.

Example: Felix's player token is standing on the action board "Deploy inhabitants". He can now choose one of the other three actions and move his token to the corresponding board.

Once per game, a player may repeat their previous action and keep their token on the same action board. They must flip their player marker to its passive side to do so.

Example: Laura is the active player. In the first game round, she has chosen to U Discover Islands. To repeat this action in the second round she flips over her player marker and does not move her player token.

The active player reveals as many island tiles as the number of players plus one, displaying them in a good view of all players.

Starting with the active player, each player takes one of the revealed islands and adds it to their player board, according to the rules for placing tiles.

In case a player cannot place an island according to the rules, or does not want to, they pass and take no island from the display.

After all players have taken one island tile, or have passed, the active player may take one more island tile or pass.

Return any remaining islands from the display to the discard pile.

Example: In a game of four players, Maria reveals 5 tiles from the stack. She then has the first pick, choosing the large wood island fragment. She immediately places it on her player board.

Starting with the active player, each player chooses one complete island of woods, mountains, or crystals on their player board with at least one space not occupied by an inhabitant (you cannot choose cities).

Then, the player places one inhabitant of the matching color from the common supply on each unoccupied space of that complete island. If the number of required inhabitants in the common sup- ply is insufficient, any remaining spaces are left empty.

The active player may choose two complete islands instead of one and deploy inhabitants immediately on both islands.

Starting with the active player, each player may choose one special island tile from the display.

In order to take a special island, the player must return the inhabitants shown on that tile from their player board to the supply. The white inhabitant represents one inhabitant of any color (green, purple, or blue).

Example: Max puts the depicted inhabitants from his board back into the supply, using a blue one for the white inhabitant of any color.

Then he places the chosen tile on his player board.

The active player does not have to return the undefined white inhabitant when taking the special island.

There are 4 different types of special islands:

Important: If the supply of victory point markers is exhausted during this action, players record all victory points that couldn't be rewarded to the players with markers on the scoring pad in the section matching their player color (put them in brackets). The game ends after this action.

The active player may either move inhabitants:

The active player also receives 2 additional VPs (at least one blue inhabitant must have been moved to get these VPs).

The game ends after a player's turn, if:

Game end exception: If the required number of island tiles cannot be revealed from the stack in the action "Discover islands", the game ends at once without performing the action.

The players gain VPs for the following categories, recording them on the scoring pad:

For each empty square on their player board the player loses 2 VPs (- 2 VPs).

For every 2 inhabitants on their player board the player gains 1 VP (+1 VP).

Each space on completed islands is worth 1 VP.

Players add up the following points:

Add up the points of all categories for each player. The player with the most victory points is the winner of the game!

In case of a tie for the most points, the tied players share the victory.