Draw pictures on your own forehead for other players to guess before time runs out!

The game is played in a series of rounds. Place the deck of Skribble Head cards in the center of the play area.

Players choose who will be the scorekeeper for the game.

The youngest player is the artist for the first round. The artist slides the drawing board on their head so it is facing the players who will be guessing.

The first player to reach 15 points wins the game. 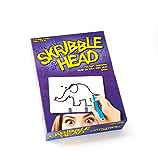