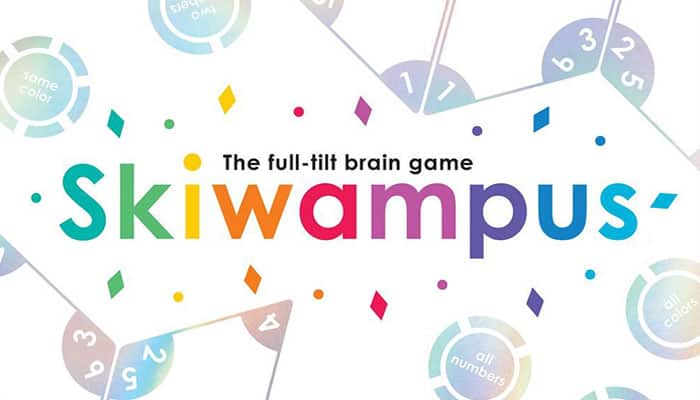 Score the most points over three rounds by quickly arranging your tiles to form patterns that match a series of challenge chips.

Shuffle and deal each player a stack of 12 tiles. Note that each tile has a mix of four colors and six numbers in the corners.

Turn all the challenge chips face down and mix them. Then place three chips per player face-up in the center of the playing area. (Stack the rest off to the side for future rounds).

Take a moment to become familiar with the various challenges written on the chips in the center.

Also note that each chip is worth a different number of points, based on the difficulty of achieving the associated challenge. The point value is indicated by the number of pips around the outer ring.

A game of Skiwampus is played over three rounds. To begin a round, someone should say "Go!"

At that point, all players grab their tiles and simultaneously race to arrange them face up on the playing surface in front of them in such a way that the numbers and/or colors in the corners connect to form complete circles that fit a challenge shown on a chip.

Once you achieve a challenge, immediately take that chip from the center and place it over the circle that was formed by the adjacent tiles.

Any players that were competing for that challenge must move on to another chip. Then try to achieve another challenge using the rest of your tiles.

Play continues until either all of the challenge chips have been claimed from the center or until all but one player has locked all 12 of their tiles.

Then check the tiles of the player to your right to make sure that all of the chips have been properly placed. (Place any incorrect chips back in the center). Each player should collect their claimed chips and stack them off to their side.

Set up for the next round by placing another set of challenge chips (3 per person) face up in the center.

Also, gather your tiles and pass them to the player on your left. When everyone is ready, start a new round, which plays out just like the previous.

At the end of three rounds, all players tally the pips on their challenge chips. Whoever has the highest total wins.

In case of a tie, whoever collected more chips wins.