Capture the most complete sets of skippers to win the game. A complete set includes one of each color skipper:

Mix all the skippers together. Randomly put one skipper on each square on the board. Take off the four skippers at the center of the board. These will not be used in the game.

At the beginning of the game, the four squares in the middle of the board are left empty.

The oldest player goes first. Play continues clockwise around the board.

All jumps are in a straight line rather than diagonal. This means you can jump and capture skippers that are vertically or horizontally adjacent to your jumping piece.

To jump: choose a skipper, lift it over the skipper you are jumping and put it down on an empty square that is adjacent to the skipper you just jumped. See examples of play to see how the jumps work.

Once you capture a skipper, you claim it and stack it on the corresponding color circles at your edge of the board.

Stephanie uses the green skipper to jump and capture the orange skipper.

Jack uses a red skipper to capture both a red and a green skipper. These 2 captures were both in a straight line.

Oscar uses a green skipper to capture 4 other skippers.

Multiple jumps are available throughout the game and you want to be careful what you leave behind on the board for other players to capture.

The game is over when there are no longer any jumps remaining on the board.

Usually there are still skippers left on the board, but they are spread out so that they cannot jump or be jumped. No one claims the remaining skippers; they stay on the board.

This is an example of what the board might look like at the end of the game.

There are no possible jumps on the board, so the game is over. No one captures the remaining skippers.

At the end of the game, the player who has the most complete sets of skippers wins the game. A complete set includes one of each color skipper. 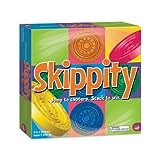 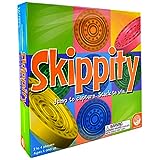