Have the last duck remaining.

Sort all of the duck cards by their color. Each player takes one color of ducks. The duck colors not chosen by a player are removed from the game. Each player places one of their cards in front of them to indicate their color.

The other cards are shuffled with the "empty water" cards to form the duck deck. The top six cards from the duck deck are dealt out to the game board from left to right.

The color of the duck first in line determines who plays first.

The effects of the card played are applied and the player draws a new action card. If none of the player's cards can be played, the player can discard one of their cards for no effect.

When ducks are shot they are removed from the board and are given to the player of the matching color. When a duck is shot, all ducks behind the shot duck are moved forward and a new card is drawn from the duck deck to fill in the last spot.

When a player has all six of their ducks in front of them, they can no longer win the game. The player still plays cards on their turn.

All of the purple ducks have been eliminated so the purple player can no longer win the game.

Take Aim: Place a target marker over one of the spots on the game board. This space is targeted and can be fired at with a future card.

The current player has played a Take Aim card and has chosen to target the space currently occupied by the pink duck.

If an open water card is shot, the target marker is removed but the water card stays in the same spot.

Quick Shot: Works as a take aim and shoot card so it can shoot spaces that aren't currently targeted. If the space shot at was already targeted, the target is removed from the gameboard.

Misfire: Shoot at a duck next to a duck that is currently being targeted.

Remove the target that is used by the card (on the space adjacent to the duck that is shot).

Two Birds: Shoots two adjacent ducks that both have a target over them. If there are no areas where two ducks are targeted next to one another, this card cannot be played.

By playing this card the target has been moved over one space to the right.

Line Forward: Move each duck card forward one space. The duck at the front of the line is removed from the board and placed at the bottom of the duck pile. The top card from the duck pile is put in the last spot of the duck line.

The current player played the Line Forward card. All of the cards are pushed forward one space. The purple duck that is pushed off the game board is put on the bottom of the draw pile.


Hanging Back: You can swap one of your ducks (matching your color) with the duck right behind it. If your duck is last in the duck line, this card can't be used.

Move Ahead: You can swap one of your ducks with the duck immediately in front of it. If your duck is the first duck in line, this card can't be used.

The orange player played the Move Ahead card in order to swap places with the purple duck.

Fast Forward: This card allows you to move one of your ducks to the front of the line. This card can only be used on your own ducks.

Disorderly Conduct: You can rearrange the duck cards in the duck line in any way that you want. The targets do not change positions.

If the front duck is shot, it is removed from the game but the duck using Duck and Cover remains on the game board but is now vulnerable.

The orange player has played a Duck and Cover card. They place their duck behind the purple duck.

Bottoms Up: This card hides a duck for a full round. After the round ends the card is discarded. If the duck is shot at, the target is removed from the space but the duck is not harmed.

When all but one player has lost their final duck, the remaining player wins the game. 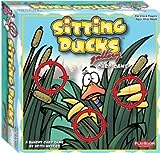 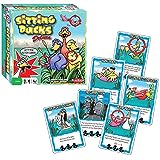