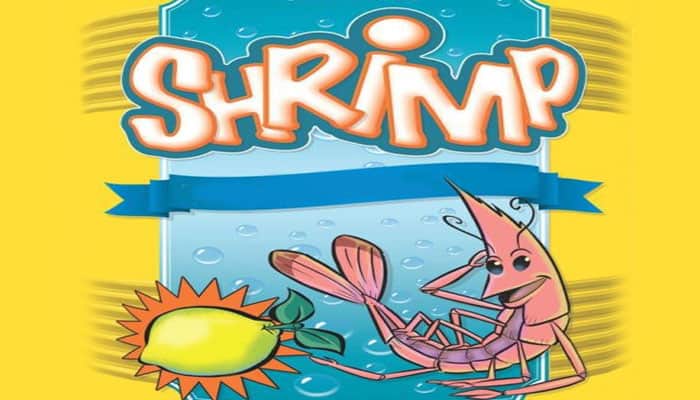 Get as many shrimps as you can: you are young, shrimp-loving cook, and you want to prepare your favorite shrimp recipe.

Place the lemon at the center of the playing area.

Place the 3 recipe cards around the lemon.

Deal all the cards face down among the players. It is not important for all the players to be dealt the same number of cards. Players keep their Shrimp cards in front of them in a face down deck.

Example 1: The table should appear as follows at the start of a 4-players game.

Shrimp cards are differentiated based on 4 different features:

Quantity: one, two or three shrimps (from left to right)

Size: large, medium or small (from left to right)

Color: green, blue or pink (from left to right)

Origin: America, Brasil or Italy (from left to right)

To describe a shrimp card, it is necessary to mention all its features.

The youngest player starts the game by flipping the first card on his deck and immediately placing it face up on top of any of the three recipe cards.

Then, the game proceeds clockwise, with the next player in order flipping a card from his deck and placing it on a different recipe card. As soon as all THREE recipe cards will have a shrimp card on top of them the real challenge will begin!

When a player plays a card on a recipe already containing a card, the new card is placed on top of the previous card, forming a pile, so that at any time during the game a maximum of 3 cards will be visible on the recipes around the lemon.

Only the card on top of each pile is considered to be in play, even if the piles are irregularly placed and the cards below are visible.

Example 3: In a 4-players game, the first three players must each play one card on a different recipe card.

When you notice that the THREE shrimp cards on top of the recipes have ONE common feature, try to be the first to squeeze the lemon (it will make the sound like a squeezed lemon!), calling out the feature that the cards have in common.

Example: In the example, the player will squeeze the lemon calling out "3 shrimps!"

If you guessed the correct feature you take ALL the cards placed on the 3 recipes and form a face up pile in front of you (your "banquet"; the cards in your banquet cannot be played again, but can be stolen..)..

Then, play resumes with you taking another turn (you flip a card, etc)..

If you called out the wrong feature, you suffer a penalty (see Penalties).

Shrimp lovers know well that seven shrimps are better that one! When the quantity of the visible shrimps on top of the 3 recipes totals SEVEN, if you are the first to squeeze the lemon first and to call out "shrimp cocktail" you claim all the cards, as for a shrimp menu.

Example 5: This is a shrimp cocktail!

A true cook can never be satisfied with a simple menu or cocktail! If you notice that the shrimp cards on top of the recipes have TWO common features, squeeze the lemon and call out the features: you claim all the cards as usual, plus you take ALSO seven cards from the banquets of other players (from the same player, or from more than one player, as you see fit).

Example 6: In this example, the player will call out "3 American shrimps!".

Example 7: To claim the cards, the player must call out "cocktail of large shrimps!"

Shrimp Dish of the Century

If you dare to spot THREE common features on the cards played on the recipes, squeeze the lemon and call out the features: If you are right, you WIN the game on the spot! If you are wrong, you suffer a penalty (see Penalties).

Example 9: If you can say "cocktail of large Italian shrimps" you are a genius and you deserve to win the game!

Example 10: "3 pink Brasilian shrimps!" and the winner is served...

If you don't have cards in your banquet you must give a card from your deck.

A player claiming the shrimp dish of the century wins the game. Otherwise, the game ends when a player cannot draw cards as his deck is exhausted.

The player with the most cards in his banquet is the winner (the cards still in the decks of the players do not count).

In case of a tie, the winner is chosen randomly!