Be the first to accumulate a total of 7 chips. In each round of play, try to win a chip by winning an odd number of tricks.

If you win all 5 tricks, which is called "Shooting the Moon', you win 2 chips.

Note: you never win a chip for winning an even number of tricks.

Give each player 2 chips to start the game with.The dealer shuffles the cards, and deals out 5 cards, one card at a time,face down to each player.

The rest of the deck is not used in the round. After the round is played, the player to the left of the dealer becomes the new dealer.

The player to the left of the dealer leads one card from their hand by placing it face up in the center of the play area.

Each player, starting to that player's left, must now in turn lay down one card face up from their hand. Each player must follow suit or play a "moon"card. If it is not possible to follow suit, the player may play any card in their hand.

When all players have played one card, the trick is complete. The trick is won by the highest numbered card of the suit that was led.

If any red cards are played in the trick, the trick has been trumped.and the highest red rocket card wins the trick.

The MOON cards affect play in special ways, as follows:

Note: a player can never have less than zero chips

At the end of the round (hand), each player counts up their total number of tricks won. If an odd number (1 or 3) tricks have been won, then the player wins one chip.

After all the chips won have been collected, a new round begins and the cards are shuffled and dealt again.

Special Instance: If a player wins a Little Moon and has no chips during the round, but at the end of the round wins one or more chips for their tricks, they still score that chip.

The Little Moon counts against chips won in the current trick and is taken immediately, but a player cannot score less than zero.

If a player fails to follow suit when the player could follow suit, that player makes an illegal play.

In this case, the hand is dealt over by the same dealer and replayed. The player making the illegal play is penalized by that partnership, giving up one chip.

The first player to accumulate 7 chips (at the end of a round) wins the game.

If more than one player ties with 7 chips, all continue with another round, and so on, until one player has at least 7 chips and 1 more than any other player.

Two to six players may play individually. With an odd number of players, the game must be played individually.

The most popular version of Shoot The Moon is played by four players, two partners against two partners. Partners do not sit directly next to each other.

All the rules remain the same, except the dealer deals out a total of three hands. The third hand is a "dummy" hand which is placed in a face-down pile between the two players.

After each player has played a card, the top card from the dummy pile is turned up to become the third card in the trick. If the dummy wins a trick, then the dummy leads its next card to start the next trick.

The player who did not deal the hand always plays next when Dummy leads. Dummy does not accumulate chips. 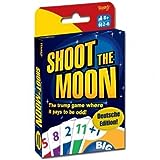