Arrange the game components as shown, with players sitting opposite one another. In SHOBU, there are four boards of active game play, with four stones of each color per board, arranged as shown.

One player will control ALL the Black stones and the other, White. The two boards closest to each player are called their Homeboards, with the rope marking this division.

One of a player's Homeboards is Dark in color, their other Homeboard is Light.

Push all your opponent's stones off any ONE of the four gameboards.

SHOBU is played in alternating turns, with the Black player taking the first turn.

A turn is comprised of TWO moves: a Passive (or Set Up) move, followed by an Aggressive move.

The Passive (or Set Up) move must be played on one of the player's two Homeboards.

The player chooses one of their color stones and moves it into any unblocked direction, up to two spaces, (no jumping)

Example: Black has chosen to move a stone (fig. a) on their Dark Homeboard. The chosen stone can move as shown; it can move in any direction up to 2 unoccupied spaces. It may not push any other stone.

In addition, the Aggressive move must be made on one of the opposite color boards.

Example (continued): Black's Passive move a was forward 2 spaces on the Dark Homeboard. The Aggressive move must therefore be on either of the two Light boards.


Note: An Aggressive move CANNOT push two stones at once, nor can it push a stone of your own color.

Example: White makes a 2-space diagonal Passive move (fig. a). White's desired Aggressive move (fig. b1) cannot be made, as two stones block the move. Instead, White could choose to move as in (fig. b2) or (fig. b3).


Important: If an Aggressive move cannot be made, the initial Passive move is also invalid. The player must select a different Passive move.

Players may find it helpful to plan their Aggressive move first and then see if a Passive move is available to support it.

Remove all your opponent's stones from just one board to WIN! 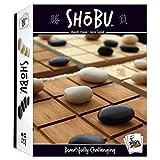