The First Turns of Shipyard

On your first turn, you will skip step 1 and go straight to choosing an action. Your available actions and potential income will be limited by the actions of those who played ahead of you.

Note: Your figure is used to indicate your chosen action. Th ere are 3 such figures in each color, but only 1 of these figures is used in a three- or four-player game. Return the other 2 to the box.

end the turn, but if a ship is completed, the starting player takes it out on a Shakedown Cruise (step 5).

He or she gets no income if his or her figure is ahead of the starting player's figure. The second player performs the chosen action (and possibly a bonus action) in step 4, which may lead to a Shakedown Cruise (step 5).

The third and fourth players' turns are similar, with each player choosing an unoccupied Action Card, placing his or her figure on it, and collecting 1 guilder for each occupied card ahead of the one chosen. Steps 4 and 5 are just like those on a regular turn and are described in detail below.

After the last player has completed his or her first turn, it is the first player's turn again. For the rest of the game, all turns begin with step 1 and proceed normally.

Red chooses to Recruit Crew and gets 1 guilder because Yellow is on a card ahead of her. Th e card occupied by Green does not give Red a guilder, because it is behind Red's chosen card.

In a two-player game, you will use all three figures to choose your actions. Two of the figures will mark your previous turn's action and the other figure will mark the action you choose this turn.

As with the three- or four-player game, your first turns are some- what different from a regular turn.

The starting player chooses an Action Card from the Action Track and marks it with two figures (step 2). He or she gets no income (step 3). Steps 4 and 5 are as normal (explained in detail below).

The starting player chooses one of the Action Cards not yet chosen and places his or her remaining figure on it. He or she gets 1 guilder for each occupied card ahead of the chosen card. (A card counts as occupied whether it is your figures on it or your opponent's). Steps 4 and 5 are as normal.

After each player has had two turns, play proceeds normally, with each player beginning at step 1.

Red chooses to Recruit Crew and gets 3 guilders because there are 3 occupied cards ahead of the card chosen. 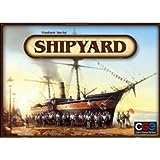