In the late 17th century, mighty ships sailed the sec is and brought all manner of goods back' to port.

As a savvy captain, you must skillfully use your crew to fill your' ship's hold with the best combination of treasure, cannons, and ahem other items to earn gold.

In the end, the player who amasses the biggest bounty will be declared the greatest Sea Captain of all time!

Direct your Crew to fill your ship's Hold with the most lucrative Crates, expertly stacking three Crates on your Hold and scoring the bounty for Gold, Cannons, and Contraband visible at the end of each voyage (round) across the high seas.

The player with the highest total value in coins at the end of three voyages wins!

ShipShape takes place over three rounds, called voyages, with each consisting of three turns of bidding. Once each player has placed three Crates on their Hold, the current voyage ends and players score their Holds (see Scoring a Voyage).

You may look down through the Crate slack, but you cannot touch it. Players may stand to survey the stack; however, they may not leave their table positions.

Down to One Card!

If at any point, a player is down to a single Crew card in their hand, they pick up all their discarded Crew cards to replenish their hand.

Alter all players have taken three Crates, the current voyage ends, and their ships arrive in the harbor to earn a bounty for the items in their Holds.

Players add up the individual values of the visible Gold, Cannons, and Contraband in their Holds; these are the values seen when looking top-down at the Hold. Any value on one Crate covered by another Crate is not counted.

Players now gain Coin tokens from the voyage per the following cargo rules:

It is possible for a player to have a particularly dramatic voyage and finish with a negative score; however, a player cannot have fewer than 0 coins, and coin tokens are never lost from a player's bounty at end of any voyage.


Start of the next Voyage

Players discard their used Crates. Build a new Crate stack from the unused Crates as described in Setup.

The game is over after three voyages, and the player with the most coins wins!

In case of a tie, the tied player with the highest numbered Hold in the third voyage wins.

When playing ShipShape with two players, there will be a dummy third player: Cap'n Happen Stance!

At setup, Cap'n Stance gets a Hold and a set of Crew cards, which are shuffled and placed face down in a draw deck. The Cap'n acts as a full player in all ways except:

Beware Cap'n Happen Stance! Though he be not smart, he be tricky . . . and he can win if you don't keep a weather eye on his antics!

With six players, each voyage is played by two interchanging groups of three players, with each group having its own stack of nine Crates.

While playing and resolving Crew cards, players compare cards only with the other two players in their group and choose crates only from the stack assigned to their group.

When the time comes to score at the end of each voyage, however, all six players compare their Holds to determine coins scored from Gold, Cannons, and Contraband.

After a voyage ends, the group configurations shift around the table so that each group consists of a new and unique combination of players for the next voyage.

Tip For Savvy Smugglers: When playing Shipshape with 5 players, use Cap'n Happen Stance and the interchanging group rules from the 6 player game! 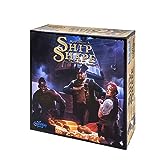