The cheeky sheep of Fragor set off on a day trip to explore the nearby fields. Games of tag abound, with sheepy heartthrob Roger rumored to be making an appearance. Beware, though-the sheep shearer is around, ready to catch and shear any sheep he sees!

The object of the game is to be the player with the most points at the end of the game. During the game, sheep score points as they travel through 4 fields: team tag, Roger's field, black sheep tag, and the shear panic field.

Set up the sheep as shown in fig. 1. Choose the appropriate timer track for the number of players. The 3-player track has 56 spaces; the 4-player track has 74 spaces. Place this at the side of the playing area.

The starting player is the person who most recently had a haircut (was sheared!). This player takes a control mat, 12 mutton buttons, and a scoring counter of one color. The player to the left then does the same, until every player has chosen a color to play.

All sheep always face in the same directioon (which is of course head first The players place their scoring counters and the flock marker at the start of the timer track (in the sheep truck marked 0). You are now ready to begin (see fig 2).

In a 3-player game, one color of sheep will be neutral. It does not score.

The sheep start the game by jumping from the truck into the field. Beginning with the starting player and continuing clockwise, each player rolls the sheep panic die and performs a "lamb slam" with a sheep matching the color rolled (see section A for a description of this action).

If the flock becomes separated, it will need to be rejoined before the next player's turn. There will be a choice between one of two sheep unless black is rolled (there is only 1 black sheep, so no choice is available) or white is rolled (the flock performs a "ewe turn")..


Example: The Red player goes first and rolls a blue on the sheep panic dice. Red picks one of the blue sheep to perform a lamb slam (fig. 3). Yellow is next to play and rolls a blue.

The Yellow player pushes the top blue sheep diagonally up and to the left (fig. 4). This continues until each player has had a turn.

The flock will now be thoroughly mixed before the game begins! Note there is no flock marker movement or points scored during the jump out of the truck. The sheep are about to enter the team tag field. Game on!

A Tip For Tour First Game:

When carrying out your free lamb slam, remember that in the first field (team tag), you score points for having your 2 sheep near each other.

Points scored are recorded on the timer mat. This has no effect on game play (that is, the lamb slam squares are not activated by a scoring counter landing on it, etc).. The points are scored as follows:

Commencing with the starting player and continuing clockwise, each player will do the following in his turn (each step is explained in more detail further on):

A. The Control Mat

Can only be played on your own sheep.

However, you could still use it to turn the flock a further 90 degrees in the same rotational direction, as this would not be reversing the previous action taken. You are allowed to reverse the action if a sheep panic roll affected the flock immediately before your turn.

However, you could still use it to turn the flock a further 90 degrees in the same rotational direction, as this would not be reversing the previous action taken.

Hopefully helpful note: The word orthogonally-that is, not diagonal-is used throughout. It is probably easiest to imagine this as the way a rook moves in chess.

Targets one of your own sheep.

One sheep moves one space in any direction (including diagonally), pushing any other sheep that get in its way. All sheep in the direction of the chosen path are pushed.

Sheep on the far side of an empty space are not pushed. In fig. 9, the yellow sheep in the middle pushes diagonally up and right. The blue sheep at the top right would now need to rejoin the flock.

A sheep carrying out a lamb slam is not required to push another sheep. In this case, it would simply move one space into an empty space. The action on the control mat can only be used on your own sheep (unlike the sheep panic die roll from the timer track).

Targets any sheep on an outside edge.

The player can push one row or column in the flock one space-e.g., either up, down, left or right (see fig. 10). A row or column can consist of just 1 sheep.

If there is a space in the row or column then the sheep beyond the space do not move. Sheep always push from the outside of a line.

Note: This differs from a lamb slam because the line is pushed from its outside edge. A lamb slam is a push from wherever a sheep is and can occur by a sheep pushing from the middle of the flock outwards.

Targets any sheep on an outside edge.

A diagonal can consist of only 1 sheep. Sheep beyond a space in a line do not move. In fig. 11 the black sheep pushes diagonally up and to the left.

The sheep hit a fence! The active player chooses one side of the flock (top, bottom, left or right). An imaginary ruler is applied to that side. All columns or rows are lined up with the ruler. All spaces between sheep will be filled.

One Small Step For Sheepkind

Targets one of your own sheep.

The selected sheep moves one space in any direction. The space it moves into must be empty (it cannot push any other sheep).

It is not allowed to become separated on its own-that is, it must move to a place that keeps it orthogonally connected to another sheep (although it may cause the flock to separate by leaving a space behind).

This action can only be used on one of your own sheep (see fig. 15, where Yellow moved diagonally up and to the left).

The chosen sheep jumps from anywhere along a column or row until it reaches the first available empty space (it may be to the end of the row or column). Diagonal jumps are not allowed. This action can only be used on one of your own sheep.

In fig. 16, the red sheep on the right boings to the back of the flock (it could have gone to the front, back, or left). In fig. 17, the red sheep boings forward to the first available space.

The whole flock is turned 90 degrees to the left or right of the direction the flock is currently facing (OK-it is not quite a U-turn but sheep are no good at geometry!). The positions of the sheep remain the

same, but their orientation changes (each sheep is turned in place). Note: If either Roger or the Shearer is present then he is moved to the front of the new facing of the flock.

B. Resolving the Flock

There is a possibility that the only direction that a flock can rejoin is orthogonally. If this happens, you return the group to the flock orthogonally in a straight line, without rolling the die.

2. If the groups meet diagonally, then the active player can choose which side it rejoins on. They may start off touching diagonally.

In fig. 21 the active player could choose to rejoin the small flock at any of the black squares-by moving it right or up (already touching).

3. If the groups are completely separated, roll the Flock Die. If the side shows "+", this separated sheep move together (as a group) in a straight line orthogonally (not diagonally) until it rejoins the flock.

It cannot move diagonally or change direction. There may be a choice of routes. You are free to choose between routes, as long as the sheep return in a straight line orthogonally (not diagonally) to the flock.

As soon as the moving group rejoins the flock, they stop moving (you may not move a group farther in the same direction fora different rejoining).

If the side shows "x", the smallest group of sheep moves together (as a group) diagonally to rejoin the main flock. The sheep cannot change direction and must move diagonally in a straight line.

Once again, there may be a choice of routes. Again, as soon as moving a group causes it to rejoin the flock, they stop moving (you may not move a group farther in the same direction fora different rejoining)

The flock begins as in fig. 22. There is a diagonal push from the red sheep in the row second from the bottom. The effect of this move is to create 4 separate groups. As the black sheep connects diagonally to the flock, the active player can choose which side it reconnects to.

Always place Roger and the Shearer facing the front and move them to the new facing when a return is carried out. Remove Roger Ram when the flock marker moves out of his field.

Fig. 26 shows the sheep at the start of the game. Yellow chooses a lamb slam and places a counter on it (fig. 27). He slams the sheep in the middle row to the left. The flock is now shown at fig. 28.

He moves the flock marker 3 spaces (fig. 29). He would also score 1 point as the 2 yellow sheep are touching diagonally. He records this on the timer track. Yellow now executes a lamb slam because the flock marker ended on a red space (see further in the rules).

See the rules above. Always remember that scoring occurs once per turn, after the flock marker has moved but before any bonus sheep panic die roll.

If the flock marker ends on a red space, the active player receives a bonus lamb slam. (Important: points are scored in the tag fields before the lamb slam is taken).

Roll the sheep panic die to determine the color of sheep that panic (note the difference between black and green on the die). The active player chooses 1 sheep of that color and executes a lamb slam.

There may not be a choice if black is rolled or sheep have been removed after shearing. If no sheep of the color rolled remain in the flock (due to being sheared), re-roll the die.

If white is rolled, the whole flock panics and executes a ewe turn (a 90 degree turn) in the direction of the active player's choice.

The game ends when the flock marker enters the second brown space (space 56 in a 3-player game and space 74 in a 4-player game). The final shearing then takes place.

Sheared sheep (the front row) are removed again and score no points. The remaining flock is then scored, giving the final points for the game. The winner is the player who has the most points.

Each player who has had both sheep sheared in the first shearing round will take no further actions (but can still win).

Very rarely, if enough sheep are sheared, the flock marker may not reach the end of the timer track. In this case, each player simply plays in turn until all actions have been taken on his mat.

The flock is then sheared and scored as if the flock marker had reached the last brown space. If the flock is made up entirely of one color of sheep (well done!), no final shearing takes place. The flock then scores as normal. 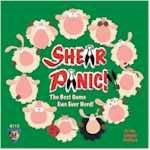 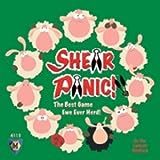