Create the biggest pile of cats you can, then do it again! Soon there'll be stacks of cats everywhere.

Shuffle all the cards, then deal 5 cards to each player. Place the remaining cards together in the center of the table. This will become your deck.

Flip over the first 3 cards of the deck and lay them face up in the middle of the table. This will be your Pet Store.

Players take turns by going clockwise around the table.

Each turn is made up of 2 phases:

These are cards that can only be played during your turn.

Cat cards are used to create new Stacks or add to existing Stacks. There are two types of Cat cards:

These cards add points to your Stack. Each Point Cat card is assigned a value between 1 and 5.

Some of them also have a special power that you can use to help you get ahead in the game!

These cards have a point value of 0. During your Action phase, you may choose to try to play a Stray Cat card on any player's Active Stack.

If no one stops you by playing a Scram card, immediately take another turn.

These are cards that are never added to a Stack and are discarded immediately after use. There are two types of Reaction cards:

These cards may be played when another player tries to add a Point Cat card to an Active Stack.

Stack, immediately move your current Active Stack to the Cat Tree and start a new Stack with the stolen card.

A stolen card is awarded to the player who played their Steal card the fastest. If 2 or more players play a Steal card at the same time, the player whose Cat card is being stolen chooses who gets to take it.

These cards may be played when another player tries to play a Stray Cat card on top of an Active Stack.

If a full round passes in which each player takes a turn and no player plays a Cat card, the game ends immediately.

Each Stack starts with a 1 Point Cat card.

If you don't already have an Active Stack (or if you want to start a new Active Stack and move your current Active Stack to your Cat Tree), you may start one by playing a 1 Point Cat card.


Adding to a Stack

During your Action phase, you may play a Cat card by adding it to the top of an Active Stack. If you play a Point Cat card, it must be worth 1 point more than the top card in your Active Stack.

A card's effect is only active while it is the top card of an Active Stack.

If a Stray Cat card is added to your Stack, you may only play a 1 Point Cat card on top of it.

At any time during your Action phase, you may choose to move your Active Stack to the Cat Tree.

Once a Stack has been moved to the Cat Tree, that Stack becomes an Inactive Stack and you may not add any further Cat cards to it.

Once each player has either played their final Cat card or declared their inability to play any further cards, the game is over. 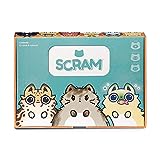