Outdo your no-good opponents by accumulating the highest total in gold coins.

Play action cards and take coins from the middle (or from opponents) until everyone has exactly eight (2-3 player game) or six (4-6 players).

Then tally up your take. Whoever has the most points wins.

Whoever tells the funniest pirate joke starts the game and play continues to the left. On your turn, take one of three actions:

Each card action is written on the bottom of the card, but here is more detail:

Take one coin of your choice from a single opponent and place it back in the middle.

First look at two face down coins in the middle and then either give them both to one opponent or divide them between two opponents. (They stay face down).

Gives Us Me Booty!

Take one face up coin from the middle and place it in front of you.

Hands Off Me Booty!

Immediately cancel an opponent's attempt to take one of your coins. This is the only card that is played out of turn. Draw back up to three cards after you play it.

Take any one coin of your choice from any opponent.

Take one face down and one face up coin from the middle and place them in your take.

Take one face up coin from the middle and give it to an opponent.

Everyone then reveals the value of all face down coins and totals up their takes. The player with the largest take is the winner! 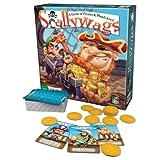