The year is 1692 in the town of Salem, Massachusetts. Evil is lurking, and you're convinced that some of your fellow townspeople are witches!

The people who have owned a Witch Tryal card at any point in the game are Witches and win when they have killed all non-Witches.

The people who have never had a Witch card during the game (the Townspeople) win if they are able to reveal all Tryal cards that say "Witch". During the game the Conspiracy card will shift Tryal cards around, so someone you trust now might become a witch in the middle of the game.

Act fast or soon you'll be the only decent Puritan in a town overrun with evil!

The player who was given the Black Cat card goes first. Proceed clockwise. During your turn:

A player dies when:

When a player dies, they place all cards from their hand and all blue cards in front of them into the discard pile. They must reveal the rest of their Tryal cards, and truthfully reveal if they ever had a "Witch" card during the game.


The 5 Laws of Salem

When a Black Card is drawn, it must be revealed immediately to the other players. Its effects are enacted immediately.

When Conspiracy is drawn, all players will take a face-down Tryal card from the player to their left. If you receive a "Witch" card, you join the team of Witches!

When Conspiracy is drawn:

If the Constable is also a Witch, he or she may intentionally save the wrong player.

Unlike the Dawn, the Black Cat card is not involved in the Night. If someone nearby is not playing, or a player has already died, it is recommended that you use them to act as the Moderator instead of using a Town Crier.


If using a Moderator: The Moderator will direct players' actions using the Night section of the Moderator Script.

If using a Town Crier:

After Night is over, shuffle the discard pile to re-form the deck, again placing Night at the bottom. Continue playing where you left off.

(refer to as needed)

Townspeople win once all "Witch" cards are revealed.


To mask movement during Dawn and Night: Make noise while the Witches are doing their dirty work. Some good ways to do this: stomp your feet, pat the table with one hand, turn on creepy music, hum, etc.

It also helps if everyone stands up before the Night begins so that everyone has easy access to the Kill cards.

After the first player dies, let them become the Moderator, taking over the Town Crier's duties. This keeps the dead player involved, and hides movement better.


To make the game more difficult:

This will make it harder to track down the spreading of Witches.

You may also play where players don't reveal if they ever had a Witch card when they die.


To avoid extra-short games: When a player has 4 or 5 Tryal cards remaining, point to 2 of them when you would normally reveal a Tryal. The player being accused may select which Tryal card to flip over. Their reaction and concentration may give something away! 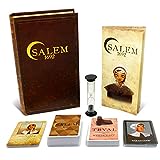 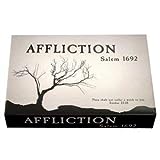