The best-selling sliding block logic game is now for two players. Every move counts in this race to cross traffic. As you draw cards, you'll need a little luck and a clever strategy to win.

Should you use your turn to advance your own Hero Car or block your opponent? The potential moves are endless, and the shifting Traffic Grid adds a whole new dimension to play.

Just when you think you've cleared a path to the finish, a shift of the grid can change the game!

Be the first player to completely get your Hero Car off the opposite end of the Traffic Grid.

Move any of the Blocking Vehicles or your own Hero Car the number of spaces indicated.

If the card shows a number higher than one, the number of spaces to move can be split between multiple vehicles.

Choose the right OR left side of the Traffic Grid and, using the "shifter" handles on the grid, shift that side up or down any number of rows.

At least one row must always connect all three Traffic Grid parts.

If a vehicle is straddling two grid parts, those two parts cannot be shifted.

The vehicle locks those two grid parts in place until the vehicle is moved fully to one side or the other.

Move anyone Blocking Vehicle or your own Hero Car as many spaces as you want until it reaches another vehicle or the end of the Traffic Grid.

If the Slide card takes your Hero Car off the opposite end of the Traffic Grid, you win!

Using the guidelines described above, move any vehicle or your own Hero Car AND shift the grid. These actions can be completed in any order: move then shift; shift then move; or move, shift, and move again(as long as the total moves equals the number shown on the card).

The first player to get their Hero Car completely off the opposite end ofthe Traffic Grid is the winner! 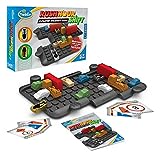 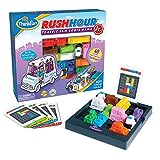