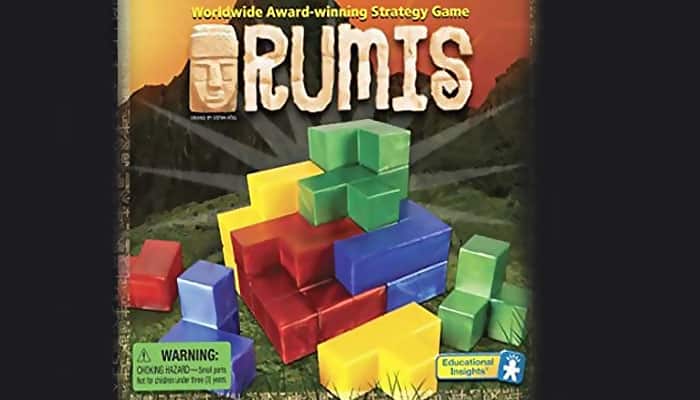 Rumis means 'stones' in Quechua, the ancient language of the Inca which is still spoken in the Andes.

In the game RUMIS, the players construct together an Inca building with their stones.

One of those legendary monuments, witnesses of a perished culture, erected with gigantic, irregular blocks of stone, held together by their incredible precision!

But who is the best craftsman? You will find out using the stones in the smartest way!

At the beginning, each player receives all the stones of one color. A building - scenario (wall, pyramid, ... ) is chosen and placed in the middle.

Rules for Placing the Stones

The game ends if no players can place any further stone.

Players get a point for each face - corresponding to the squares on the game board - visible from above of their own color. This means, that one can get up to 4 points for a single stone. The players deduct the number of their own remaining stones from this total.

The winner Is the player who has gathered the most points at the end of the game.

Depending on scenario and number of players restrictions to the size and height of the scenario apply, shown in the table on the upper left of each game board.

The height limitations of these scenarios only depend on the number of players.

The height is given in numbers corresponding to the squares on the game boards.

Example: In the scenario CHULLPA with two players, the maximum height is 4, which corresponds to the length of the longest stone.

The red line indicates a limitation of the projection of the scenario, if less players are in the game. In a two player game with CORICHANCA this means for example that only squares within the red line may be covered.

The solitaire version: RUMIS can be played alone in various ways. You could try to build a multicolored cubes in various sizes (e.g. 3x3x3, 4x4x4 or 5x5x5). Using only pieces of one or two colors is more tricky. Will you find out how many ways there are to build a 3x3x3 cube in one color?

Even trickier is to build a cube of 5x5x5 using stones of all colors and placing them in turn according to the RUMIS rules, i.e. stones have to touch their own color.

Game for two with four colors: If you play RUMIS with two players only, the game will not take very long. To make it more exciting you can simulate four players. Every player receives the stones of two colors.

Of course, the height limitations of four players are applicable and stones have to be placed alternating the own colors. At the end of the game, the player with the most points in one color wins the game.

Ruinas scenarios: With two (or three) players, you can play another variant of RUMIS. A scenario is chosen and all players together place all the stones of an unused color on the board. Then the game starts as usual, but the limitations for 3 (or 4) players apply. Examples can be found on www.murmel.ch.

The game RUMIS contains eleven different types of stones, each type exists once in four different colors. Missing or broken stones can be ordered at the address below, indicating the code of this stone as shown on the side of the bottom of the game box and its color (for example, blue S03).


Remarks to the 4th Edition

Since the first edition RUMIS got a lot of friends all over the world and even won international awards. A lot of feedback, ideas and suggestions for improvements have inspired us to edit this edition with new scenarios and variants.

To keep updated with new ideas, scenarios and further developments, have a look to our website www.murmel.ch regularly.