In the Mekong delta, every year, the bravest young people face each other in a famous contest. Building bridges with planks and stones, they have to cross the river to reach the village on the opposite bank.

To arrive there, they have to program their actions cautiously, avoid their opponents' maneuvers and the unexpected interventions of the Mekong's dragons. The first arriving to his destination will receive a golden dragon from the king himself!

Leave your village, place stones, build bridges and cross the board to reach your destination village.

A game is composed of several turns. A turn takes place the following way:

Each player chooses 5 Action cards from those he has in hand. He places them face down in front of him in the order he wants to play them, starting on the left.

Those cards represent the 5 actions the player will have during this turn. Careful, once placed they CANNOT be exchanged nor moved.

When all the players have 5 cards in front of them, they all reveal their first card at the same time. In turn, they perform the action, one after the other, proceeding clockwise, always starting with the first player.

Once all the first actions are completed, the players reveal their 2nd cards and perform those actions. Repeat the same process for all 5 . cards.

Warning: A player can have one of his actions canceled by a Dragon card (check back page of the rules "Dragon cards").

The turn ends once all the actions have been resolved:

The player MUST place 1 stone on one of the 27 islands.

The player MUST place 2 stones, each on one of the 27 islands.

Flip the board to the side where the islands disappeared. Instead of placing the stones on the islands you have to place them directly in the water. For the rest of the game, keep the usual rules.

The player MUST place 1 plank supported by two stones, or a village and one stone.

The player MUST place 2 planks following the same instructions.

The player MUST evaluate the distance between two stones, or a stone and a village, then choose a plank from his reserve. Once a plank is chosen it cannot be changed, even if it turns out to be a poor choice!

Important: A plank cannot rest on another plank except where a stone or a village can support both of them.

The player MUST choose between:

If no planks and no stones can be removed, the action is lost.

The player MUST move his pawn onto an available (not occupied by another pawn) adjacent plank or village (check example 1).

Example 1: The green pawn must move on a free adjacent plank. Here, he can go on the green plank on his left or on the red plank on his right. He cannot go on the pink plank already occupied by the yellow pawn.

The player MUST move his pawn up to two planks or one plank and a village (check example 2).

Example 2: The green pawn must move up two planks. Here, all the planks around are occupied by other pawns, he can only reach the red village or come back on the plank he is already standing on.

Jump over another Pawn

The player MUST make his pawn jump over a pawn standing in an adjacent plank.

and goes back to his starting village (check example 4).

Example 3: The yellow pawn must jump over another pawn. Here, it can only jump over the green pawn and land on the red plank because there is no other pawn next to him.

Example 4: There is no pawn the yellow one can jump over. He misses his jump, falls in the river and goes back to his starting village.

During the resolution phase, a dragon card cancels the action of the card placed in the same position for the player having the same color as the dragon on that card.

A player cannot play more than one Dragon card each turn. He also can decide to use none.

In a setting with less than 6 players, each player removes the dragons of the absent colors from his hand.

The game instantly ends when a pawn reaches his destination village even if the turn and the actions are not finished. 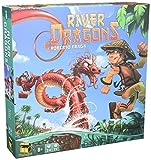