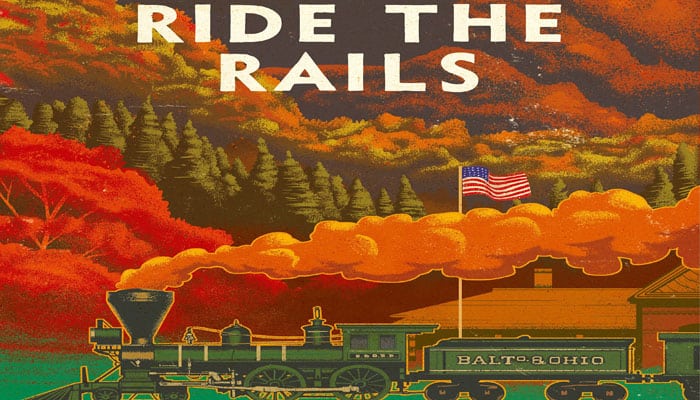 1 Place the game board in the center of the table.

2 Place one Passenger on each city. Cities are marked with this icon:

3 Place the 6 Tracker disks and white Hexagon Tracker on their matching spaces on the counting chart on the game board.

4 Place the locomotives next to the game board.

5 Players choose a color and take the matching player board and player disks.

6 Players place one disk on each zero space on both money tracks.

The game ends at the end of the 6th round. The player with the most money is the winner.

The game is played over 6 rounds divided into 3 phases each:

Once the round is completed, turn order is adjusted, and, after each of the first four rounds, an additional Railroad is added to the game.

In reverse turn order, each player takes one locomotive of any available color and places it in the leftmost matching Railroad row on their player board. This is now a Share in that Railroad.

The icons to the right of the Round Marker (right) show which Railroads are available in each round. In the first round, only Red and Blue locomotives are available. You may build track for and receive points from that Railroad.

If a player builds track in a Mountain hex (or hexes), the total number of locomotives able to be placed by that player is reduced by one. The reduction is only ever one placement, no matter how many Mountain hexes are placed on in a turn.

If a player has already placed all but one of their locomotives in a turn, they are not permitted to place their last one on a Mountain hex, as this would exceed the reduced total of locomotives allowed.

The player must own at least one Share in a Railroad to build track for that Railroad. Players can place locomotives of any number of Railroads they own Shares in, as long as they do not place more than the maximum number.

In the first round of play, the Red and Blue Railroads are available.

The Red and Blue Railroads cannot begin in the same city and must start in one of the six multi-colored East Coast cities.

The first locomotive of any given Railroad must be placed in one of the cities that displays its color.

Except for the first locomotive placed, each placed locomotive must connect adjacently to at least one of that Railroad's existing locomotives.

A Railroad may only have one locomotive in a hex. Each hex holds a maximum of two locomotives, except Chicago. There is no limit to the number of locomotives permitted in Chicago.

The six multi-colored East Coast cities (displaying Blue, Red, Orange, and Black Railroads) may only hold one locomotive-as indicated-and a Railroad may only occupy up to two of these cities.

There are reminders of these placement rules and restrictions on the board:

Each round, except for the 6th and final round, a new Railroad becomes available. Each Railroad's initial placement is different:

Remember, if the Railroad's color is shown on a city hex, it means that Railroad can start their network on that city.

The only exception to this is the Yellow Railroad, which may be placed on one of the westernmost cities as described above.

Chicago: Whenever a player builds track in Chicago, they immediately receive $2. Record these on the track surrounding the board. This is also true when building track for the first time with a new Railroad.

If its initial placement is in Chicago, that player receives $2. Move that player's dollar marker up two spaces on the track.

$5 Cities: Each of the four cities with a green $5 banner immediately gives $5 to the first player to build track into that city. No bonus is given if another Railroad builds into the city, or if a Railroad starts in the city.

Transcontinental: The first player to make a Transcontinental connection-where a line of track comprised of different Railroads connects a West Coast Purple & Black city to one of the six multi-colored East Coast cities-immediately receives the Transcontinental bonus.

In turn order, each player selects one Passenger and transports it from the city they are in to another city. The player decides the starting city (which must contain the Passenger) and the ending city.

The player must be able to trace a route of locomotives from the Passenger's starting city to their ending city via Links. A Link is a path of locomotives belonging to a single Railroad that connects two cities.

A player does not need to own Shares in a Railroad to use its Links, although using a Railroad's Link will give money to that Railroad's shareholders. The route may pass through multiple cities, and the Links can belong to any number of different Railroads.

No looping is allowed-each hex may only be visited once during the journey. Additionally, the player decides through which Railroad's Links the Passenger travels.

Finally, add the total number of Links traveled through for the entire journey and add 1. This is the number of cities visited, including the starting and ending cities. The player who transported the Passenger receives that number of dollars on the money track.

For each Link used on the journey, increase that Railroad's value by one. Every time you move a Tracker upwards, also move the hexagonal Tracker an equal number of spaces.

Each other Tracker will show how many dollars are paid to players for each matching share they have.

When finished, move the Tracker disks back to zero and return the hexagonal Tracker back to the 1 space.

If at any point a player's total dollars exceeds $100, move their second scoring disk to the appropriate space on the 100s money track.

The player with the least amount of money becomes first player for the next round. Adjust the order based on players' total dollar amounts, from lowest to highest.

The player with the most money will play last. In the case of ties, swap player positions. Adjust the turn order track on the game board to reflect the new turn order for the next round. Advance the Round Marker to the next round.

The game ends at the end of the 6th round. The player with the most money, as indicated on the track around the edge of the board, wins the game. Ties are possible.