Before playing for the first time, carefully detach the tokens and chips from their cardboard frame.

In each round, the objective is to collect the chip in the center. One space on the board, the target space, has the same color and symbol as this chip. Your task is to figure out how the robot of that color, the active robot, can be made to end up on this target space in as few moves as possible.

The player who can succeeds in the fewest moves collects the chip ... and the one who collects most chips wins the game!

At the start of a round the robots move only in the players' minds; in other words, each player tries to imagine the shortest route to the target space without actually moving the pieces. Robots move horizontally or vertically as the players direct, but they have no brakes!

This means that once a robot is set in motion, it cannot stop until it hits an obstacle. Obstacles are the edges of the board, the walls pictured on the board, the center- piece and other robots.

When a robot hits an obstacle, it can either stop or ricochet at right angles, left or right, until it hits another obstacle - and so on indefinitely.

Each movement of a robot to the next obstacle counts as 1 move. When a robot stops, it may move back the way it came only after another robot moves.

When a robot reaches a square with a diagonal colored wall, it passes through the wall if its color matches the wall and bounces off the wall at right angles if its color does not match the wall.

When a robot reaches a wall opening, it passes through and appears, still moving, on the board exactly opposite the opening. In these special cases, the robot does not "stop" and continues to an obstacle, counting the entire move as just one move.


Playing out a round

Note: most situations on the board can be solved in less than 10 moves, but occasionally a situation will arise that requires twenty or more. Such situations are interesting as problems, but in a game they tend to be frustrating.

Therefore, we recommend that if, after 4 or 5 minutes no one has made a bid, one of the players set up the sand clock. If at the end of the minute there has not been a bid, return the chip to the table, reshuffle and replace it with another.


Example 1: a different robot is moved to serve as obstacle.

The red robot is moved to create an obstacle (moves 1 and 2); then the green robot uses it as an obstacle as shown (moves 3-5). Notice that the obstacle-robot, like the target robot, had to move without stopping until it hit an obstacle.

Example 2: the green robot could move directly to the target space, but since this is not allowed, another route is chosen.

The chosen other route requires 6 moves. Notice that the route crosses the robot's own colored square token, which shows that these tokens are not obstacles.

You may mix the boards from both this version and the original, but always use a complete set: be certain the full board has all 17 different target spaces.

When playing in a tournament setting, we suggest the following change: in case of equal bids, the player who bid first has precedence. 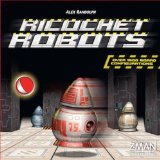 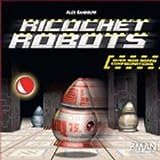