Three or four can play. Place the gameboard in the center of the table.

Each player picks a color and takes the bid card, bidding screen, influence cubes, and score marker of that color. Place the score markers, with the "bomb" side up, on the exclamation point at the top-left of the board.

The gameboard has two important features. The Support Track goes around the edge. Your score is the overall support your faction has gained in your troubled city. These points are never lost. If your Support score reaches 99, turn your marker over to the 100 side and go around again.

The board also shows seven different "areas" of town, representing different sorts of political power. For in- stance, the Cathedral represents religious power, and the Fortress represents military power. Each area has 5 to 8 white spaces for Influence Cubes (below).

Controlling an area at the end of the game will give you extra support.

Each time you gain influence in an area, you will place one of your cubes on an empty space in that area.

If all the spaces in an area are full, no more cubes may be placed there. Even when an area is full, though, Influence Cubes can be switched. There are 25 cubes of each color.

Each player has his own bid board, divided into spaces. Each space represents an influential person who can help your cause . . . and shows the benefits that person will give you if you win him over. None of these characters ever stays bought, though. You'll use the bid board on each round.

Your screen keeps the other players from seeing your bids be- fore they're revealed.

There are three types of tokens.

You will place these on the bid board to indicate what sort of per- suasion you are applying to each of the characters. From strongest to weakest, the tokens are:

Each player starts the game with one Force, one Blackmail, and three Gold. The rest of the tokens make up the bank. There are 32 Gold, 12 Blackmail, and 12 Force.

The game is played in rounds. Each round has four phases. All players act simultaneously on each phase - there are no "turns". The phases are:

The town is full of spies, so everyone knows what resources his rivals have. At the beginning of the round, every player must show the tokens he's starting with. Knowing your opponents' capabilities will help you plan your own strategy.

During the Bidding phase, each player hides his bid board behind his screen, and places his tokens in secret. Each type of token represents a different sort of "persuasion" to use against the town's power structure.

There are two ways to bid illegally.

If the highest tokens in a bid are the same kind, look at their numbers. Two Force beat one Force, three Force beat two, and so on.

You must use all your tokens each turn, but you may not bid on more than six characters in one turn.

When you're finished bidding, raise a hand. When all play- ers are ready, the screens are removed.

With the screens set aside, each player can see all the bids. Now each bid is evaluated.

Resolve each row of characters from left to right, and then move down to the next row.

Thus, the General - in the upper-left corner of the bid card - is always the first character evaluated, and the Mercenary is al- ways last.

The highest bid wins (see Bidding). The winner immediately takes the benefits granted by that character (see Winning a Bid, below). If the highest bids are tied, no one wins. And if no one bids on a character, no one gets that character's benefits for that round.

After each character is evaluated, regardless of the outcome, all players remove all tokens spent on that character. Put the discarded tokens in the bank. At the end of the round, no tokens will be left on anyone's bid board.

Winning a character can give you different kinds of help.

After all bids have been resolved, check the number of tokens each player has. Anyone with fewer than five tokens (regardless of type) takes enough Gold coins from the bank to bring his total to five.

You never get Force or Blackmail during the patronage phase. The only way to get those tokens is by winning character bids. Your secret patrons will only give you Gold, and only when you really need it!

After the patron age phase, a new round / begins.

The game is over when all the influence spaces on the board are full at the end of a Resolution phase. Players will now score added support for the areas they control and for the tokens they earned on the last round.

Example A: The Cathedral has seven spaces. Red and Green each have two influence cubes, but Blue has three. Blue wins the 35 Support.

Example B: Red and Blue each have three cubes, and Green has one. The area is tied and no one gets its support.

The winner is the player with the most Support.

The Spy and the Apothecary can be the two most powerful characters, if used correctly. They are the only way to change the positions of cubes on the board, or shift the balance of power in an area once the spaces are full.

Winning the Spy will allow you to take an influence space away from another player. The Spy is also the only way to reduce the total amount of influence a player has on the board.

The more influence spaces are filled, the stronger the Apothecary becomes. In the early rounds, there may not seem to be much point in switching influence cubes, but late in the game, you can help yourself and hurt your rivals with a carefully planned exchange.

Remember, you don't have to move your own pieces with the Apothecary.

The standard rules assume that the townspeople pocket every bribe they are offered, and never give refunds. What if you tell them you'll only pay when you see results? Winning bids still go to the bank, but losing and tied bids are returned to the players to be used on the next round.

Refunded tokens count toward your Support total at the end of the game.

If you control all the spaces in an area, your influence there is so great that it can't be broken. None of your cubes there can be removed or switched, and you get an extra 10 Support for that area at the end of the game.

You can allow negotiation. For instance, "I won't bid on the Captain if you don't bid on the General this round".Deals made during the game are not binding, though anyone who breaks a promise will find it harder to convince someone to make more deals with him. 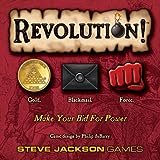