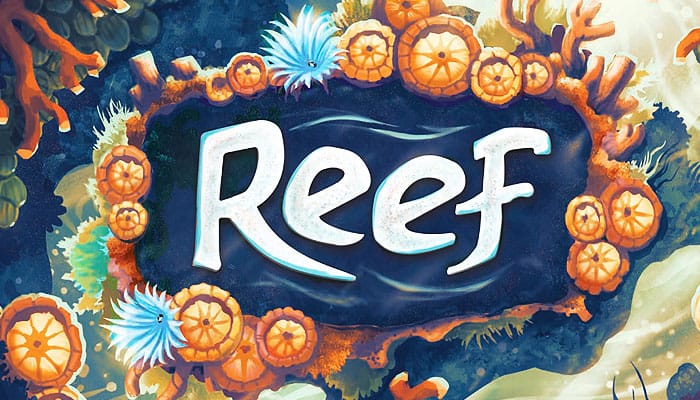 Observe the growth of nature's most beautiful and exotic natural structure: the coral reef Found primarily in the Indo-Pacific region, it has taken reefs thousands of years to grow. Over that time, they have mesmerized marine life and created amazing aquatic ecosystems. Prepare yourselves to do the same... and open your eyes to the beauty of the oceans.

Collect the most points by cleverly acquiring and playing cards that let you grow your reef and score its patterns.

Sort the 112 coral pieces by color to form 4 separate supplies A. Depending on the number of players, each of these 4 supplies must comprise a certain number ofcoral pieces:

Return any unused coral pieces to the box. Sort the point tokens by their value (I, 3, 5,10,20) and form separate supplies for each value B

Give each player three l-point token C, which he places in front of him as his personal point stock. This is where he collects all of his point tokens.

Shuffle the 60 cards and deal 2 cards face down to each player D. Each player takes his cards into his hand, concealing them from the other players. Then set the card deck face down aside for later.

Take as many player boards E as there are players. Make sure the one with the starfish F is included. Shuffle them and place one at random in front of each player. The player with the starfish board will be the first player.

From the coral supplies, each player takes 1 coral piece of each color G. Then each player places one of his 4 coral pieces onto each of the 4 center spaces of his player board H (in any order).

If all players know the game, we recommend the following setup variant: Each player places his 4 pieces on any spaces of his player board other than the 4 central spaces. He may even stack them up any way he likes.

Next to his player board, each player should leave some room for a face-up discard pile I. Take the deck of cards set aside earlier and place it as a face-up draw deck J in the middle of the table.

Draw 3 cards from that deck and place them in a face-up row next to the deck. That row of 3 cards forms the card display K.

Reef is played over a series of rounds. Each player will take one turn each round, starting with the first player and going clockwise until the game end is reached. On your turn, you must perform one of the following two actions:

Then it is the turn of the player to your left.

A. Take a card from the card display (or from the deck) into your hand

Choose one of the 3 cards from the display and put it in your hand. If there are any point tokens on that card, place them in your personal point stock.

Then bring the display back up to 3 cards by moving the top card from the deck to the display.

Instead of taking one of the 3 cards in the display, you may take the top card from the face-up draw deck and put it in your hand. However, to do so, you must immediately place one l-point token from your personal point stock onto the card with the lowest printed point value (the number in the bottom right corner) in the display.

If there is a tie for the lowest printed point value, place it onto the tied card of your choice. If your personal point stock is empty, you cannot take the top card from the draw deck.

Attention: You have a hand limit of 4 cards. If you already have 4 cards in your hand, you cannot take another card. You must perform action B instead.

B. Play a card from your hand to grow your reef and (if possible) score a pattern

Play a card from your hand by placing it onto your face-up discard pile, next to your player board. Then perform the two following steps in this specific order:

1. From the supplies of their respective colors, take both coral pieces shown on the top of your played card and place each of them anywhere on your player board: Each can be on any blank space or on top of a piece or stack.

You are free to stack these two pieces in any order onto one another or place them separately. However, once you have placed them, they remain where they are for the rest of the game.

Attention: There is a stack limit: If a stack already contains 4 coral pieces, you are not allowed to place another piece on top of it.

2. Afterwards, you may score the pattern shown on the bottom of the card. To do so, check how often the pattern appears throughout your reef:

To determine if and how often the pattern appears in your reef, bear the following rules in mind:

Patterns can appear in any right-angle orientation.

Only The Topview Is Relevant!

This means that it is always the color of the top coral piece of any stack that counts for the pattern, no matter what color any of the pieces below it are.

This also means that if a pattern on a card shows pieces with no printed numbers within them, your top pieces' heights do not matter when completing that pattern.

So for a pattern with a printed number, only your top pieces of the right color and height count.

If a pattern shows printed numbers with a "+" next to them, all of your top pieces of the right color and with a height equal to or higher than the printed number count.

If patterns show wild pieces (a 4-colored shape) with printed numbers, only the height of those top pieces is relevant, not their color.

Each of your top pieces can only count towards one completion of the pattern. Therefore, to have a pattern appear multiple times throughout your reef, each of its completions cannot share any pieces.

There are 8 cards that show a special pattern like this one.

All of them have different color combinations but basically work the same.

For example, the pattern on the right means: Take 2 points for each purple top piece that is adjacent (orthogonally or diagonally) to your highest coral stack with a yellow top piece.

If there is a tie for the highest, choose one of them. (It does not matter how high any of the stacks of other colors are - including the purple ones - as long as there is no higher stack with a yellow top piece).

As soon as at least one color of coral pieces runs out, the game will end after players finish out the current round of play.

In rare cases, the game also ends immediately if the card deck runs out.

Each player who still has any cards left in his hand may now score the patterns of those cards (without taking any coral pieces first). However, for each card a player still has in his hand, that player may only score a completed pattern once, even if the pattern appears multiple times throughout his reef.

Once this is done, the player with the highest score wins the game.