Children discover the numbers one through ten while having fun playing! They learn to count on their own and how numbers can be represented in the form of dots on a die, written numbers, or fingers.


Getting to Know Numbers

Before the first game, carefully punch out the picture cards and their 3 matching puzzle cards.

Shuffle the picture cards. Each player gets three cards, which they place face up in front of them. If there are four players, each child only receives two cards.

Remaining picture cards are set aside with their matching puzzle cards. You can swap these out in the next game. Soon you'll play with all the numbers from 1 to 10.

Shuffle the rest of the puzzle pieces and lay them out on the table face up. The die shows three different symbols:

For the die cards.

For the number cards.

For the finger cards.


Each set is created as follows

There are five giraffes on the large picture card. This number is shown in various ways: with 5 dots on a die, as the number 5, and with 5 fingers.

The die card is placed on the left on the picture cards, the number card in the middle and the finger card on the right.

The youngest player starts. Let's say for example that they have the picture cards with the 3 dogs, 6 tigers and 7 pandas.

If they throw the die and roll the symbol for numbers, they look for the number cards with the 3, the 6 or the 7.

If they discover the correct number card with the 3, they can place it onto the picture card with the 3 dogs. In addition, they exclaim aloud: "I have the three dogs and the number 3!"

Now it's the next player's turn. They might roll the symbol with the hand and look for a finger card that matches their picture cards.

If they counted incorrectly and the card does not fit their picture card, they put this card back. It's now the next player's turn.

If a player should roll a symbol for which they already have all of the matching cards, they're out of luck and the next player takes a turn.

The first player who places all of the puzzle cards onto their picture cards wins the game.

Shuffle the puzzle cards and spread them out face up on the table. Place all picture cards in a pile.

One at a time, take the top card from the pile and try to find and connect the matching die, number and finger cards.

Tip: Start by playing with the yellow picture cards from 1 to 5. Once you know these well, add the blue picture cards. 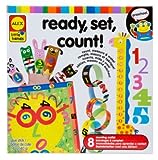