In Raxxon, the players are a team of city leaders in a world on the cusp of the zombie apocalypse. Evacuation protocols have been activated.

The federal government, strapped for resources due to the infection's spread, has paired your team with officials from Raxxon Pharmaceuticals. Raxxon's ample resources are necessary, but can they be trusted?

Players work as a team and win or lose together. To win the game, move all healthy population cards from the population to the evacuation pile before the city is overrun or Raxxon gains enough power to take over.

3 Effect Trigger (before the arrows)

4 Effect (after the arrows)

The game takes place over a series of rounds, called days. Each day contains the following phases in order:

During crowd setup phase, create the crowd for the day by dealing cards from the population draw pile facedown into a grid. The number of cards in the grid is determined by the number of players in the game:

If there are not enough cards to create a full crowd, deal out successive rows until the population draw pile runs out.

Cards immediately above, below, to the left or to the right of each other in the crowd are considered to be adjacent.

Once the crowd is set up, starting with the first player and going clockwise, each player may take a turn or pass. Once a player passes for any reason, her entire turn is skipped for the rest of the day.

Play continues to move clockwise around the table for those who have not passed until all players pass or until a card effect showing the end of day icon triggers.

At that time, the player actions phase ends immediately and end of day begins.

When taking a turn, a player must resolve the following steps in order:

Note: Do not discard action tokens after triggering their consequences; they remain there until the end of day phase or an in game effect says otherwise.

A player may decide, after triggering a consequence or part of a consequence, to end the turn rather than to continue. This counts as passing.

The top action of each player's character sheet (always Investigate) does not require an action token and can always be chosen.

Any other action is available to be chosen if there are one or more empty action token spaces next to that action.

After choosing one of these actions to perform, place an action token on the leftmost empty action token space next to that action.

Note: Players do not trigger the consequence for an action token on the turn it was placed; it won't trigger until the beginning of that player's next turn.

The player character sheets describe how to resolve each action. Actions include:

Example: When Flipped 08 / CARRIER A carrier card was just flipped face-up. There is already 1 other carrier infected card face-up in the crowd, making 2 total.

Once all players have passed or

Once the end of day phase has been resolved, continue on to the next day. The player to the left of the most recent active player becomes the first player in the new day.

triggers but there are no cards in the infect ion supply, the infected overrun the city before the population can escape and the group immediately loses.

If Raxxon's power reaches 8, Raxxon takes over the city before the population can escape and the group immediately loses.

Raxxon can be played solo! Play with the following adjustments: 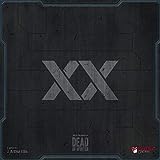