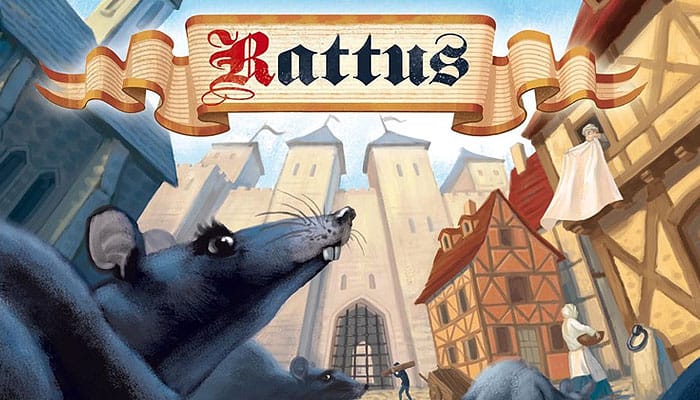 Europe, 1347. A disaster is about to flee when the plague approaches, the strike. The Black Death reaches warfare conducted by the Knights Europe, and during the next 4 - 5 years, the population of Europe will be halved. The players settle in the various regions of Europe, while the plague spreads throughout all of the continent. The players gain help from the various classes of the middle ages:

The Peasants provide population growth, the wise Monks keep the rats away, the rich Merchants spreads the plague to new areas, the Witches control the spread through magic and witchcraft, whereas the Kings avoid the plague by staying in their fortified palaces. But the plague does not make any distinction: When the rats arrive, no one can feel safe. When the plague withdraws and the game ends, the player with the highest surviving population wins.

The game board is laid out on the table. The six class cards are laid out beside it.

Each player chooses a color and receives all the wooden cubes of this color.

The twelve starting rat tokens (the ones marked with purple circles) are mixed (face down), and one rat token is placed in each region of the board (still face down). In a 2/3-player game, only 8/10 regions are used, thus only 8/10 starting rats are placed on the board.

The Plague Piece is placed in a randomly chosen region.

Thereafter, the starting player makes the first turn, and the other players follow clockwise around the table.

The player on turn plays through the following phases:

Phase A and B may be done in any order, but phase C (moving the plague piece) must always be done at the end of the turn.

The player may take one class card, either one of the untaken ones beside the board or from another player. The class cards taken by the players are kept clearly visibly on the table in front of each player.

Each of the six cards yield certain advantages to the player owning them (these will be explained later), but at the same time they increase the probability of the cubes of the player being killed by the plague. The player must keep his class cards until they are taken away by another player, once taken there is no other way of getting rid of them.

Even if the player already has one or more class cards on the table in front of him, he is allowed to take another card during each of his turns. Thus it may often happen that one player has more than one card at the same time, in this case he gains all the advantages of all the cards he has.


B. Place new cubes on the board

The player may place cubes of his own color in any one region on the board. He places as many cubes as the number of rat tokens currently present in the chosen region. Thus, the player may not add any cubes to a region with no rat tokens (exception: the card «Peasant»).

There are currently three rat tokens in Gallia, one in Germania and none in Italia. It is the red player's turn.

He chooses to add one of his cubes to Germania.

I Finally, the player must move the Plague Piece. The Plague Piece must be moved to a neighboring region of its current location.

The player on turn chooses freely among the neighboring regions, but he is not allowed to let the Plague Piece remain in its current region. In the following, the region moved to by the Plague Piece is called the «Plague Regions-.

2. The Plague ravages the Plague Region.

Note: The rat tokens must be placed face down, no players are allowed to look at the front sides!

Note: There may never be more than three rat tokens at the same time in any one region! Therefore it is not allowed to add rats in a region already containing three rats. In this case the player has to choose another of the regions neighboring the Plague Region. In the rare event that all the neighboring regions of the Plague Region contain three rats, no more rats are added.

The front sides of all the rat tokens show two kinds of information:

One or more symbols. These symbols indicate which of the classes that are infected by the plague. For each given class symbol, the player currently owning the corresponding class card has to remove one of his cubes from the Plague Region and put it back into his supply. If the player does not have any cubes in this region, he is not affected.

In addition to or instead of class symbols, the symbols («Majority») or («All») may also appear. For each given |H, the player currently having most cubes of his color in the Plague Region has to remove one cube. In the case of a tie for majority, all tied players have to remove one cube each.

The symbols are always evaluated first, that is, they always affect the player who has the majority of cubes in the region when the rat token is revealed, even if other symbols on the rat token would result in another player having more cubes than this player. For each given A all players with cubes in the Plague Region have to remove one cube each.

As soon as the Plague Region either contains no more rat tokens or no more wooden cubes, the current turn ends, and the next player begins his turn.

It's the red player's turn, and he is about to enter phase 3 («Move the Plague Piece*).

First, the plague spreads. Since Gallia contains three rat tokens, two new rat tokens have to be placed in one or two of the neigboring regions of Gallia. Tire red player choosed to place them both in Hispania.

Thereafter, the plague ravages Gallia- One by one, the three rat tokens are revealed:

Tire rat token shows one Bourgeoisie symbol and one Church symbol. Since the green player currently has the Merchant (Bourgeoisie) card, he has to remove one of his cubes and return it to his supply.

Tire blue player has the Monk (Church) card, but since he does not have any cubes in Gallia, he obviously does not have to remove any.

Since Gallia still contains more cubes, the next rat token is revealed. It has the limit value 3. However, currently Gallia only contains two cubes (since one of the green ones was just removed), therefore this rat token has no effect.

Finally the last rat token is revealed. It turns out to have a limit value of 2, therefore the plague once again has an outbreak.

Tire symbols given on this rat token are («Majority»), Bourgeoisie and Church. Tire green and yellow player are currently tied for the Majority, therefore they both have to remove one cube each.

The red player's turn now ends, with the following situation:

Note: Only the player whose turn it is nray use the special abilities of his class card(s). He may use the abilities of each card only once each turn, and only before phase C is played (exception: Knight).

A player holding this card may, at any time during his turn, move one of his cubes on the board to the palace area. This cube must be taken from a region containing no rats.

Cubes in the palace area are safe for the rest of the game, and count as regular cubes when counting score at the end of the game.

A player holding this card may, at any time on his turn, move any one rat token from any region to a neighboring region. This movement may be performed either before or after adding new cubes in phase B.

Please note that no region is ever allowed to contain more than 3 rat tokens. Therefore a player holding the Monk may not move a rat into a region already containing 3 rats.

A player holding this card may move the plague piece up to two steps in phase C, before the effects of the plague are evaluated.

Additionally, the player may, before the rat tokens are revealed, decide to let the plague piece count as two neutral population cubes in the affected region for the purpose of evaluating the population limits on the rat tokens.

A player holding this card may add one cube more than usual when he adds cubes to a region in phase B (Place new cubes on the board).

A player holding this card may, at any time on his turn, move up to 3 cubes of his own color from one region to one of its neighboring regions.

Finally, he may, if he wishes, swap the two selected rat tokens (this obviously only makes sense if he looked at rat tokens in two different regions).

The game ends after the turn during which either

After this, the player with the most cubes still in play on the board (including any cubes in the palace area) wins.

In the case of a tie between two or more players, the game is won by the player (among the tied players) that would have had the next turn if the game had not ended.

Peasant: A player holding this card may add a cube of his own color in any one region. 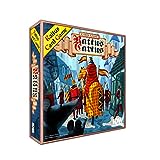